WASHINGTON, Oct. 13 (Yonhap) -- The military chiefs of South Korea and the United States paid a joint visit to the Korean War Veterans Memorial in Washington on Thursday.

Gen. Lee Sun-jin, chairman of South Korea's Joint Chiefs of Staff, and his U.S. counterpart, Gen. Joseph Dunford, made the visit ahead of their annual Military Committee Meeting (MCM) set for later Thursday.

It was the first time the JCS chairmen of the two countries paid a joint visit to the memorial, an official said.

"Your sacrifices 66 years ago helped the Republic of Korea become what it is today," Lee said of the 1950-53 Korean War in which the U.S. fought alongside the South. "We will overcome North Korea's nuclear and missile threats with the strength of the Korea-U.S. alliance forged in your blood and sweat."

During the visit, Lee handed Dunford an "Ambassador For Peace" medal to be awarded to Dunford's father, Joseph F. Dunford Sr., a Korean War veteran who as a young Marine participated in the landmark landing operation in the western port of Incheon that turned the tide during the war.

Lee, who has been on a visit to the U.S. since Tuesday, is scheduled to hold trilateral talks with his U.S. and Japanese counterparts on Saturday to discuss ways to deal with North Korean threats. 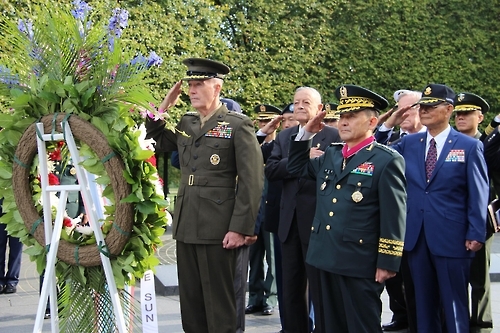