WASHINGTON, Oct. 19 (Yonhap) -- South Korea and the United States agreed Wednesday to launch a high-level dialogue to discuss how to carry out the U.S. "extended deterrence" protection of the Asian ally from nuclear and missile threats from North Korea.

It represented a firmer commitment from Washington to use nuclear weapons and all other military capabilities to defend the ally amid heightened security concerns in South Korea in the wake of the North's fifth nuclear test last month and a series ballistic missile launches.

"Extended deterrence" refers to the commitment to use nuclear weapons to deter attacks on allies. The U.S. has provided extended deterrence or a "nuclear umbrella" to South Korea after withdrawing nuclear warheads from the country in the early 1990s.

Ensuring the commitment's implementation was a key focus of Wednesday's talks.

"I assured the minister of our commitment, the United States' commitment, to defend South Korea through a robust combined defense posture and through extended deterrence, including the U.S. nuclear umbrella, conventional strike and missile defense capabilities," Kerry said during a joint news conference with Yun after the talks.

"Let me be clear. Any attack on the United States or its allies will be defeated and any use of nuclear weapons will be met with an effective and overwhelming response. To that end, I'm pleased that we agreed to establish a dialogue on extended deterrence," he said.

Kerry said the vice-minister-level dialogue will comprise foreign and defense ministries of the two countries.

"This step that we're taking on the extended deterrence is further evidence of our readiness, our resolve and our determination across governments to protect ourselves from threats from North Korea," he said.

"If the North continues to violate international law by pursuing its ballistic missile and nuclear weapons programs, it will come under even stiffer sanctions, greater pressure and be left further and further behind while the rest of the region prospers," he said.

Kerry also said the U.S. will deploy the THAAD missile defense system to the South as early as possible. 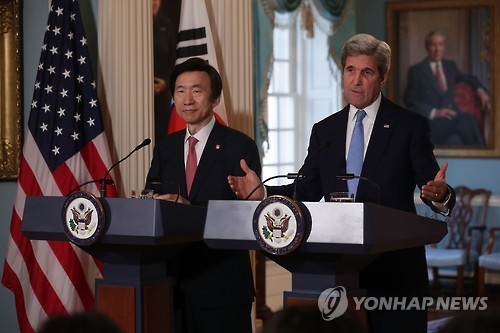 Yun said that the two countries will discuss details of extended deterrence when their defense ministers hold annual talks on Thursday. The meeting could include discussions on bringing in U.S. strategic assets to South Korea, such as nuclear-capable B-52 and B-1B bombers, F-22 stealth fighter jets and nuclear-powered, cruise-missile submarines.

"Now, North Korea has it within its power to achieve the security, the development and the respect that its leader has claimed to want. But those can only be achieved through a discussion of denuclearization with respect to weapons," he said.

Kerry said the U.S. is working to come up with additional U.N. sanctions on the North with a focus on closing the "livelihood loophole" in the last U.N. Security Council resolution, referring to the exception that allows Pyongyang to export coal for livelihood purposes.

The U.S. will continue to pursue such pressure measures as they are "entirely preferable obviously to the military choice which we have again and again said is a last resort only as a matter of defensive measure to protect our nations," Kerry said.

Kerry also said the U.S. is serious about imposing sanctions on individuals and entities assisting the North with its weapons programs. Asked if the U.S. is seeking a secondary boycott, he said that's not what the U.S. is doing now right, but the option isn't off the table.

North Korea should also be a key focus of the next administration, he said.

"I'm absolutely confident without any question whatsoever that whoever is president of the United States, they're going to have to be and will be very, very focused on this particular challenge, which is one of the most serious that we face globally," he said.

At the start of the talks, Carter also made strong remarks reaffirming the U.S. commitment to the South.

"Make no mistake. Any attack on America or our allies will not only be defeated, but also any use of nuclear weapons will be met with an overwhelming and effective response," Carter said.

Wednesday's talks came just a few days after Pyongyang carried out a banned test Saturday of a Musudan intermediate-range ballistic missile, believed to be capable of reaching the U.S. territory of Guam, about a month after its fifth nuclear test.

The test was unsuccessful as the missile exploded shortly after take-off, but the launch still showed how committed the North is to developing nuclear-armed, long-range missiles. Officials and experts have warned Pyongyang could keep conducting nuclear and missile tests in coming months.

A key focus of Thursday's defense ministers' talks, known as Security Consultative Meeting (SCM) will be whether the U.S. will agree to permanently deploy strategic assets in the South.

The U.S. has temporarily sent such assets as a show of force in the wake of the North's two nuclear tests in January and September, but perceptions have grown among South Koreans that such one-off missions are not enough at a time of unprecedented threats from the North.

Permanent deployment of such military hardware is expected to reassure South Koreans of the U.S. defense commitment amid heightened security jitters that sparked calls for developing the country's own nuclear weapons or bringing U.S. nuclear bombs back into the country.

Such sophisticated weapons would also serve as a strong warning against the North.

In the SCM talks, the two sides are also expected to check on progress in efforts to deploy the U.S. THAAD missile defense system in the South, while reaffirming that the deployment is aimed only at defending against North Korean threats and poses no threats to China and other countries.