The video had garnered 100,006,512 views on the YouTube channel run by 1theK, the content production division of Loen Entertainment, as of 9:45 a.m. Tuesday.

Loen is the music label behind "Young Forever pt. 1," the group's EP album out in June last year.

Including views on the official channel run by the band's management agency, the video's total views on YouTube has reached 105.39 million.

The powerful electronic hip-hop track has garnered much popularity from home and abroad, with its lyrics telling real stories of the singers' musical endeavors.

The group's latest album "Wings" reached as high as No. 26 on the main Billboard 200 in the United States and No. 62 on the United Kingdom's Official Albums Chart Top 100. Both were the highest positions ever reached by a Korean musician. 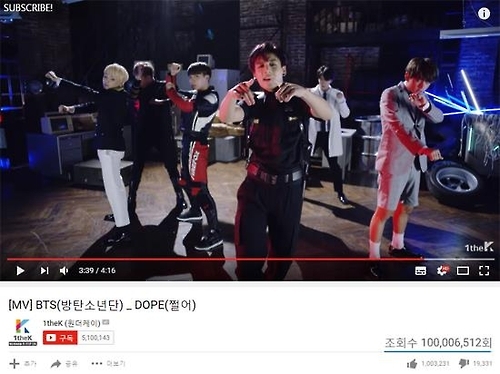