Brave Entertainment CEO and chief producer Kang Dong-cheol, better known by his stage name Brave Brother, speaks during an interview with Yonhap News Agency at his office in central Seoul on Oct. 25, 2016. (Yonhap)

SEOUL, Oct. 30 (Yonhap) -- This year has been another big year for South Korean hip-hop: A year that brought more hip-hop talent into the mainstream music scene. Hip-hop survival shows like "Show Me the Money" continued to be major boosters of the genre, even driving ordinary office workers to rent studios and try their hand at rapping.

However, the trend could change next year, according to Brave Entertainment CEO and chief producer Kang Dong-cheol, better known by his stage name Brave Brother. The 37-year-old star producer believes that electronic dance music (EDM) has been sidelined to clubs in Korea, but its territory will broaden with the turn of the year.

"EDM will thrive again in 2017," Kang said in his interview with Yonhap News Agency on Tuesday at his office in Seoul.

"EDM has already established itself as the big trend in the global music scene, and we'll see K-pop catch up with such move next year. Hip-hop has been big in 2016, but the listeners have grown tired of hip-hop songs crowding the music charts for three, four months straight. Indulging in a single genre can't last forever, just like food," he said.

Looking forward to the change in wind in 2017, Kang sees K-pop as an exciting challenge since he thrives on bringing not-so-hot genres to the mainstream and making them into something everybody can sing along to. 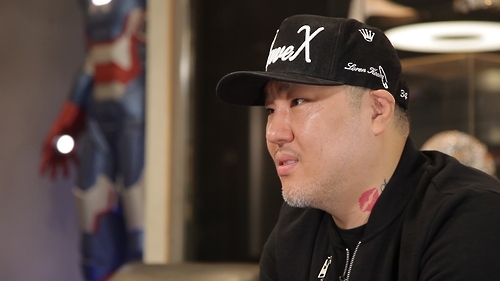 Kang has been an exception to the general market belief that the career span of a typical top-selling K-pop songwriter is about five years.

He led the K-pop songwriting market from the mid-2000s, hitting the bull's eye countless times with mega-hits sung by first-tier idol groups. Some of his greatest hits include "Last Farewell" by BigBang, "Whatcha Doin' Today?" by 4Minute, "Like A Cat" by AOA and "Crazy" by Son Dam-bi. Groups Sistar, After School, Brown Eyed Girls and Teen Top also owe much to Kang's work.

His songs are instantly recognizable, since they all start with the phrase "Brave Music."

Just as well-known as Kang's songs is his personal history -- he was a gangster who accidentally found a passion for writing K-pop songs and became one of the best-selling creators of K-pop hits. Born to a family of humble means, now he's grown rich enough to drive a Maybach and Rolls-Royce Phantom and decorate with rare figurines, limited edition basketball shoes and a fancy audio system.

One of the most frequently asked questions he gets is how can others become as successful as him -- but the answer is not as simple as the question.

Kang started making music at 20, believing that he could write better songs than those he had heard. He locked himself at home for about two and half years, giving himself completely to music.

"I thought I'd die if I didn't make this," he recalled. "Effort and passion cannot describe the scale of (such desperation). I virtually detached myself from the world." 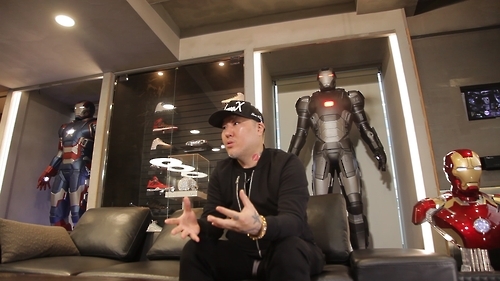 His ultimate goal is to make his agency Asia's leading entertainment firm. But Kang's goal for 2016 has been business stabilization, focusing his management resources on musicians and producers. In addition, he made investments in non-music sources of profit, such as the restaurant and cosmetics businesses.

Brave Entertainment currently focuses on three distinct units - musicians, producers and actors. However, Kang is planning to indefinitely close down actor management, something that he has done for almost two years.

"I've come to realize that (actor management) is not my field of expertise. All I could provide to my actors were following up on the board's report and offering fancy transportation," he said.

But, he is always open to bringing on talented music producers to work with his agency. He also showed eagerness to offer financial support to "singers who really can tug at people's heart strings by singing."

Now, his biggest source of musical enthrallment is rapper Punch.

"I want to help him win the hearts of all music lovers around the world." 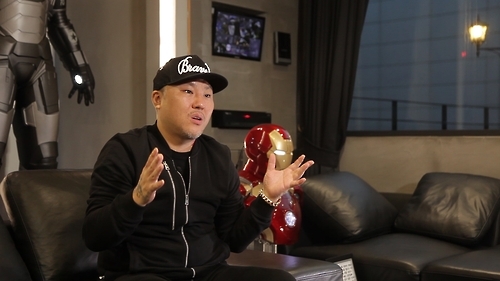 In Kang's big picture, making inroads into the U.S. hip-hop market is daunting but feasible.

"Considering the nature of music, it is difficult to determine the 'nationality' of a musical genre. Of course, hip-hop was born in the U.S. but we can't say all the best rappers are from the U.S.," he said.

In 2015, Kang flew to the U.S. and appeared on entertainment shows with the title No. 1 K-pop songwriter.

"At first, they looked down on me (and my ability to produce hip-hop) because my list of songs had many pieces for K-pop boy bands and girl groups," he said.

But the bias eventually went away after Kang let them listen to the K-pop songs that he wrote at YG Entertainment and other works from different genres.

"After listening to my beat, YG asked me if I was really a producer of K-pop (and not hip-hop). He was impressed how a Korean could roll out a beat that sounds so American. But considering that there are many hip-hop songwriters with larger talent than mine, it became clear that the quality of K-pop music is already on par with the world-class level."

According to Kang's experience, South Korean producers stand on equal ground with their U.S. and Japanese counterparts in arranging, DJ mixing and other producing techniques. There was a time when K-pop came short of J-pop in production quality, but now, J-pop uses well-made K-pop songs as references.

In addition, Kang expects the K-pop music management industry will become more globalized in the future.

The long-standing formula for K-pop going global was to send local hit bands out on world tours and to appear on overseas television shows.

But in the near future, Korean agencies could start fostering stars from the beginning in the U.S. with U.S.-born Korean artists or even U.S. artists without a Korean background. This will be a tough task that demands learning different entertainment cultures and markets, Kang said.

"But as a producer, I cannot be exempt from making those efforts," he added.