"Kim has instructed the special investigation team to implement a probe into the national defense sector starting on Nov. 1 to make the causes for the launch failures clear," said Kim Heung-kwang, a North Korean defector and executive director of Seoul-based dissidents' group North Korea Intellectuals Solidarity, in a press conference.

Kim attributed the investigation to the North Korean leader's belief that spies from the United States and South Korea had been implicated in a series of Musudan missile failures.

It is speculated that North Korean authorities believe South Korea and the U.S. have done something detrimental to the missile parts, including the integrated circuit chips, that are imported from foreign countries, according to Kim.

Headed by the North's State Security Minister Kim Won-hong, the investigation team has around 60 anti-spy experts, he said. 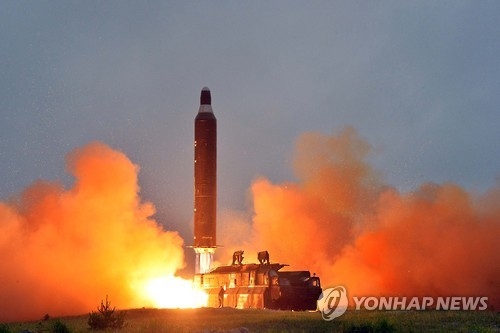 Subject to investigation are all the people involved in the making of Musudan missiles.

"Officials and workers who engaged in the launches of the missiles are now banned from traveling and their mobiles phones are confiscated to check their conversation records," Kim said.

North Korea has test-fired the Musudan missile eight times since April 15 and the launches ended in failure except one on June 22, when a missile flew 400 kilometers and reached an altitude of over 1,400 km. Others blew up immediately after launch, which may indicate that Pyongyang has not fully mastered the related missile technology.