SEOUL, Nov. 7 (Yonhap) -- Former Arsenal and AS Monaco forward Park Chu-young may have past his prime, but he still can finish.

Both Seoul and Jeonbuk entered the final day showdown tied at 67 points. But since Jeonbuk had the tiebreaking edge in goals scored, Seoul had to win to grab their first league title since 2012. Jeonbuk only needed a draw.

Park, however, entered the pitch just 36 minutes after the kickoff, replacing Yoon who picked up a yellow card and failed to impress in his first start of the season. Park, 31, didn't disappoint his fans who traveled more than 240 kilometers from home to support Seoul at Jeonju World Cup Stadium in Jeonju, North Jeolla Province.

In the 58th minute, Park controlled Yun's through ball and blasted a right-footed strike in the box to beat Jeonbuk goalkeeper Kwoun Sun-tae. It turned out to be the only goal in the match.

Park was so emotional that he didn't even show his trademark goal celebration, which is to kneel down and pray. Instead, he took off his jersey and ran to his teammates. He was booked for excessive celebration, but still, he was a happy man.

"When I took the shot, I just thought this must go in," Park said after the match. "I'm so thankful that I scored a goal in a big match like this." 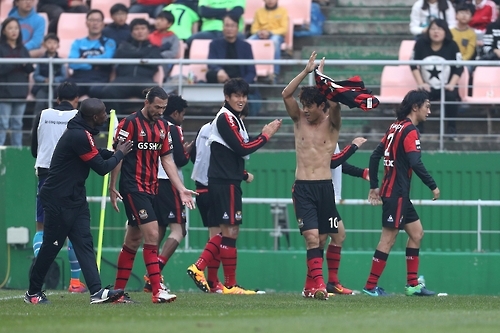 Seoul had lost all three encounters against Jeonbuk in this K League Classic prior to their final meeting. Seoul were also eliminated by Jeonbuk at the Asian Football Confederation Champions League semifinals. But Park's goal washed away their painful memories.

The goal was Park's 10th of the season. It was the first time since 2005 that Park had a double-digit goal tally in the K League.

Park rejoined Seoul last year after having served stints in France (AS Monaco), Spain (Celta Vigo), England (Arsenal, Watford) and Saudi Arabia (Al-Shabab). The veteran, however, failed to live up to his reputation in 2015, scoring just seven goals in 23 matches, while battling a series of injury.

This season, Park was more of a rotation member. He played 34 matches, but 13 of them he came on the pitch as a substitute. Damjanovic and Carlos Adriano, who scored 17 goals this season, were regular starters on the attack.

After new head coach Hwang Sun-hong arrived in June, Park played on the flanks and supported other teammates. Park admitted adapting to the new position was difficult but said he was ready to sacrifice for the team.

"I've never played (right wing) before, so everything, including defense, was difficult," he said. "But I'm not a young player. If the team can get a good result, I'll play anywhere."

In his 12-year pro career, this was the first time that Park finished the season with a league title.

"I remember that I said that my goal for 2016 is to finish the season without an injury," he said. "I didn't really expect to win the title."

The forward, who is a member of the bronze-medal winning South Korean team at the 2012 London Olympics, can wrap up the season with another trophy. Seoul will play the Korean Football Association (FA) Cup final against Suwon Samsung Bluewings later this month.