SEOUL, Nov. 14 (Yonhap) -- Fan meeting events are arguably the closest way for K-pop idols and their fans to get together and push up the real-and-here factor of the usually inaccessible stars.

South Korean boy band Bangtan Boys, which commonly go by their acronym "BTS," made the most out of one such accessibility event. The seven-member act touched the hearts of some 38,000 global fans who surged to the two-day event on Saturday and Sunday in Gocheok Skydome, southwestern Seoul.

All of the members, including Jin, Suga, J-Hope, Rap Monster, Jimin, V and Jungkook, were present. 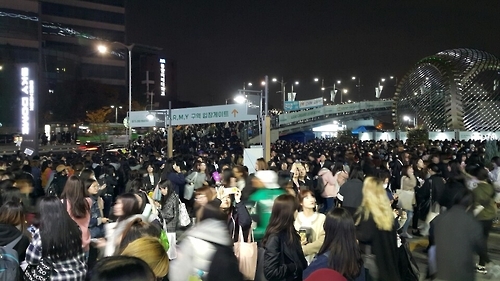 On Sunday, the largely female crowd of many different nationalities and races crowded nearby Guil and Gaebong stations, creating a human labyrinth of BTS fans before and after the K-pop show.

Since its debut in 2013 with the EP "2 Cool 4 Skool," BTS boasts a large global fan base around the world, particularly in Japan and the western hemisphere. Its second and latest full-length album "Wings" crashed into 26 on the Billboard 200 chart, the highest placement among K-pop idols.

At a glance, the 3.5-hour event resembled a half-length concert and extended talk show, with a mix of entertainment team match, parody drama and a skit.

The fan meeting event took off at 4 p.m. with a pregame session, screening the music video of BTS' latest hit "Blood, Sweat & Tears," the lead single of its second LP "WINGS."

Fans yelled out "BTS" and the real names of the band's members in unison while waving white glow sticks, nicknamed "army bombs," to create an ocean of white points in the dark. 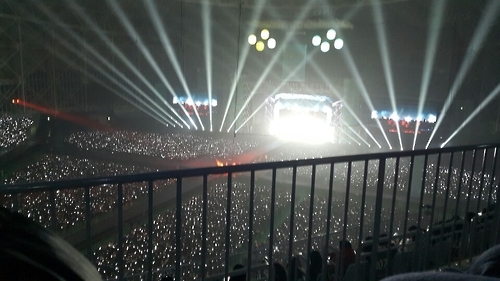 Ear-popping screams and roars shook the dome during certain scenes, such as BTS' Jimin baring his shoulder or Jin kissing a statue of evil.

Apparently, nationality and proficiency in Korean mattered little at the global event.

"I guess I get the gist (of the talk show,)" recalled AJ Wingo, a 21-year-old Ohio girl, after attending the Sunday event.

"I found them on their music video of 'Boys In Luv' on YouTube. I like how they're so lively and playful, and their music is really good," added the psychology major student, glad to see BTS during her one-semester stay in Korea.

After the MV screening cranked up the temperature, BTS members emerged from beneath the stage on a lift.

The K-pop stars kicked off the performance with "Blanket Kick," a cheerful dance-pop number from BTS' first LP "DARK & WILD," released in 2014. The BTS members, aged 19 to 23, flaunted adorable moves in bed, sitting on and rolling in snow white sheets.

Then BTS members split into two units, staging different variations of their past hits, including "Boys In Luv" re-arranged as a children's musical number.

In the following talk segment, members shared trifling yet fun episodes about their everyday lives as BTS. For instance, the boy singers did not give each other birthday gifts until Jimin, the sweetheart mascot of the band, gave it a start.

The talk show, including a reverse interview session of BTS asking questions of its fans, largely revolved around BTS members' competing over their "professionalism in cuteness," as BTS's J-Hope put it, and seeking unwavering support from their fanbase. 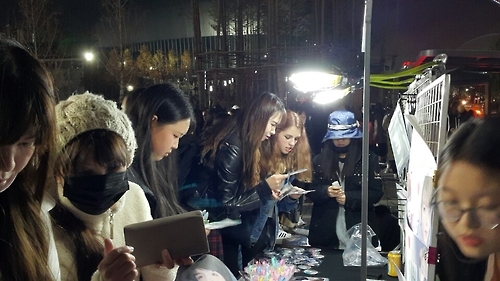 In the reverse interview, J-Hope asked "What do BTS mean to you?" Then the singer read a response from a Thai BTS fan aloud, which read, "An inspiration to enhance my proficiency in Korean."

J-Hope wished to hone his "professionalism" outside the musical realm, such as being discreet about things that he used to dismiss casually without giving them a second thought.

The audience again broke into laughter when his bandmates picked on him, calling his "aegyo," roughly translated as cute displays of affection using baby-like words and gestures, the biggest part of his professionalism.

Rap Monster, the band's rapper, said his teammates are "way too nice," when asked to identify the strengths and weaknesses of BTS.

"One day we ordered chicken delivery and I grabbed a drumstick without asking permission," he said.

"Nobody made a fuss about it -- they're so angelic," he added, arousing laughter from the crowd.

Jungkook, the youngest of the seven, wowed the fans by demonstrating push-ups with his bandmate on his back. The workout maniac also did squats while giving another member a piggyback ride.

When his turn came up, V had a chance to talk about his feelings on the recently emerged controversy about him allegedly harassing a young female fan at a signing event. The rumor turned out to be a partially edited hoax by a fan of EXO, another famous K-pop boy group, and the uploader extended a formal apology.

"I don't want to hear Army say sorry to me, because I've received far greater love from it," said V, drawing a gigantic cheer from the fans. 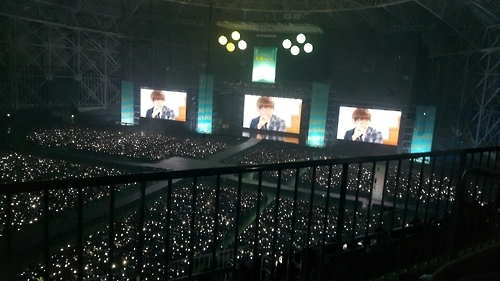 Another highlight of the fan event was the screening of "House of ARMY," a parody drama about the everyday life of a BTS fan.

Rap Monster played Kim ARMY, who makes an exaggerated fuss about anything with the slightest link to BTS. The role was originally offered to Jungkook, but the shy singer found the role overwhelming and passed it over to Rap Monster.

In the drama, J-Hope plays ARMY's mother who turns out to be as zealous a fan of BTS as ARMY. V plays ARMY's haughty elder brother, Jungkook her clueless father and Suga her goofy uncle.

Jimin plays ARMY's puppy, the faithful aide of ARMY, and Jin plays a triple role as a package delivery man, banana and clock.

In the talk show, Jim reminisced, "It gave me a fit when I stood face to face with Jin and thought (Jin) was way too good-looking for a banana."

Towards the end of the fan event, BTS and the fans rocked the stage with "Heungtan Boys," a dance-pop song about wild youth, which came down to the denouement of ballad-pop number "Save Me."

At the end of the event, J-Hope told his fans, "I hope today's event remains a good memory to you all."

Amid fans' disappointment that the event was drawing to an end, Jimin cheered the girls up by vaguely hinting at the band's next plans.

He said, "We will be coming up with something around the year's end." 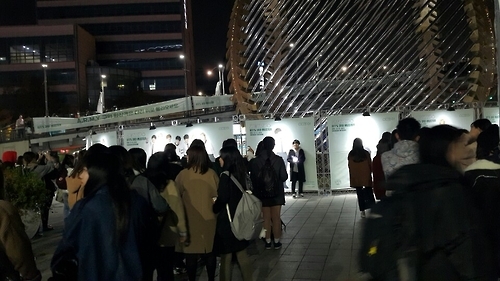 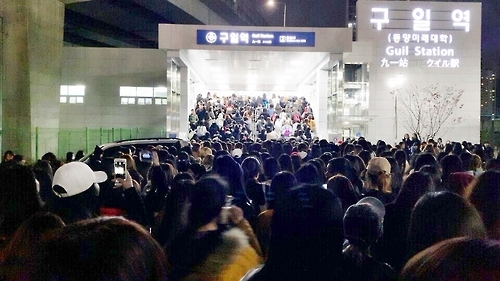