CHEONGJU, South Korea, Nov. 17 (Yonhap) -- During her first visit to South Korea in 1960, the famous American author Pearl S. Buck was fascinated by a number of things. A well-known anecdote has it that she saw a child picking up beans with chopsticks and was so impressed by the sight that she compared it to watching a circus on a table.

Stories about chopsticks are not uncommon in Korean history and literature. Around the 13th century, the wife of a government official buried her son in the central city of Cheongju along with a pair of chopsticks, coins and an ink stick. When the relics were excavated from the grave centuries later, historians believed they symbolized the mother's wish for food, money and continuous studies for her son in the afterlife.

These chopsticks and some 150 other pairs have been put on display at the Cheongju National Museum in the city, located 137 kilometers south of Seoul. It wasn't until recently, though, that the municipal authorities decided to celebrate the deep influence chopsticks have had on shaping the culture of the city and the nation as a whole. 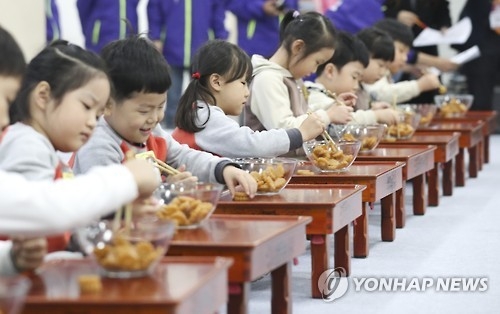 Last year, Cheongju inaugurated the Chopsticks Festival as part of its efforts to fill the role of a "Culture City of East Asia." The title was shared by Qingdao, China, and Niigata, Japan, following a 2012 agreement among the three countries' culture ministers to seek reconciliation through cultural exchanges.

A key figure behind the festival was Lee O-young, a scholar who carried out studies of the Cheongju region and also served as South Korea's first culture minister. When asked by the municipal authorities to help the "Culture City" committee, he recalled a few things that could best represent Cheongju: metal print books, large discoveries of ancient metal spoons and chopsticks, and prickly ash trees. In the end, Cheongju chose chopsticks.

"When Western people look at Asia, the first thing they think of is chopsticks. This is where the identity of Asian culture lies," Lee wrote in his book published last month called "The Cultural Gene of Chopsticks."

"But no one until now had conducted new scientific research into chopsticks culture or created an event to put it on display," he wrote. 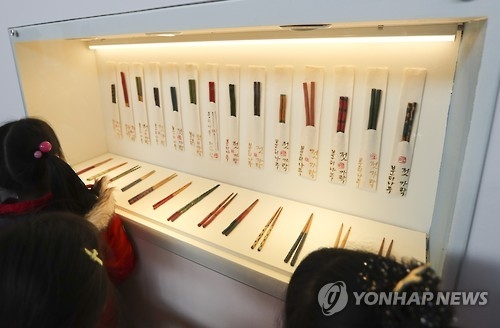 Now in its second year, the Chopsticks Festival kicked off on Nov. 10 for an 18-day run. The main festivities, however, were held on Nov. 11 to coincide with "Chopsticks Day," which was given its name during the inaugural fest last year because of the resemblance of the numbers in the date to chopsticks. Since then, South Korea, China and Japan have also joined hands to push for the listing of chopsticks culture as a UNESCO world heritage.

"There are more than 1.6 billion people living in the three East Asian countries and the thing they use three times a day is chopsticks," Kim Ho-il, secretary-general of the Cheongju Cultural Industry Promotion Foundation, said during an interview with Yonhap News Agency. The foundation, affiliated with the Cheongju government, organized the festival with support from the culture ministry, the state tourism agency and other related bodies.

"I believe the significance of chopsticks lies not only in their being roots of culture but also in their value as (tools of) education, etiquette, brain development, science and history," he said.

Kim credited chopsticks with contributing to Koreans' talent in all things requiring the use of the hands such as golf, archery and welding. 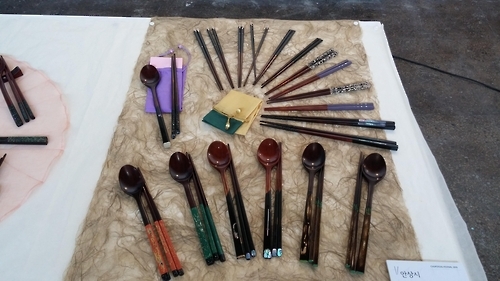 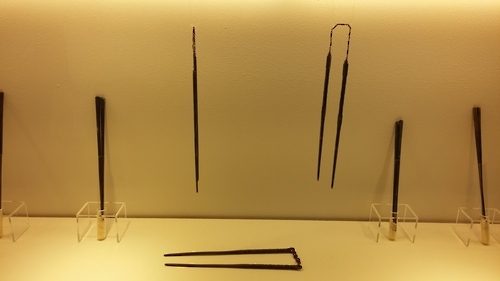 The benefits of using chopsticks are well documented.

According to Jang Rae-hyeok, a senior researcher at the Korea Institute of Brain Science, using chopsticks causes more than 30 joints and more than 60 muscles in the fingers to move. Of the 206 bones that make up our bodies, one quarter are found in the hands. In other words, the more we use chopsticks, the more brain activity we induce and the faster our brains develop.

Chopsticks were once more than just eating utensils. A spoon and a pair of chopsticks were given by mothers as a wedding gift to their daughters and placed on tables during ancestral rites.

Lee Jong-kuk, a master of traditional Korean paper called "hanji," tried his hand at making chopsticks last year after hearing the former culture minister speak about a song from the Goryeo Dynasty (918-1392) that sang of a pair of chopsticks made from prickly ash wood that were taken away from one's lover. 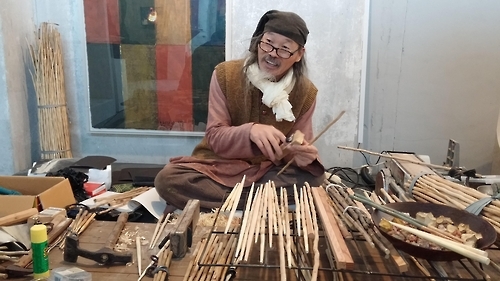 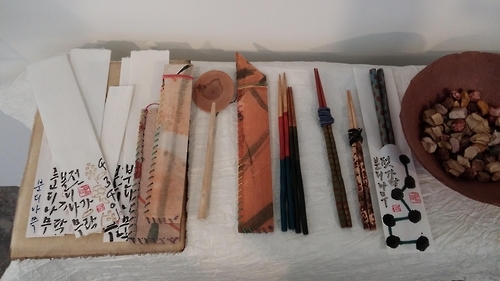 Sitting in his booth at the festival's chopsticks exhibition, the master praised the qualities of the wood.

"The plant was used in the past as medicine and it can serve as a preservative too. That's why the food doesn't spoil," he said, explaining the benefits of using chopsticks made from the wood. "Most trees that grow slowly are heavy, but this grows slowly and is light. Most trees are empty inside but this is completely filled."

Lee, who revived the craft of making chopsticks from prickly ash, has made more than 100 million won (US$85,000) from selling his work over the past year.

In this, Kim, the foundation chief, said he sees plenty of opportunities to expand the market for chopsticks. For example, Raon, a Korean firm specializing in chopsticks for young children, sells millions of chopsticks abroad every year, reflecting foreigners' growing interest in the tools. He also drew a link to the global spread of Korean pop culture, saying more people will be drawn to eat at Korean restaurants that use chopsticks.

In another booth at the exhibition, lacquer master Kim Sung-ho applied varnish to his chopsticks. On one side was a display of a meter-long pair of chopsticks priced at 100 million won and four pairs of regular-sized chopsticks valued at 15 million won each.

The master, who has been designated an intangible cultural heritage, said he has worked in his profession for more than 40 years but leaves the future of his craft to society.

"I always say that unless our people cherish our goods, we have no future," he said. "Only then will (these goods) be consumed and naturally lead to a continuation of the tradition." 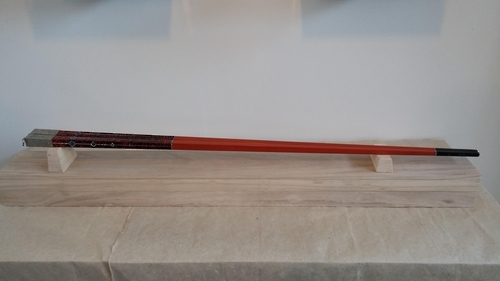 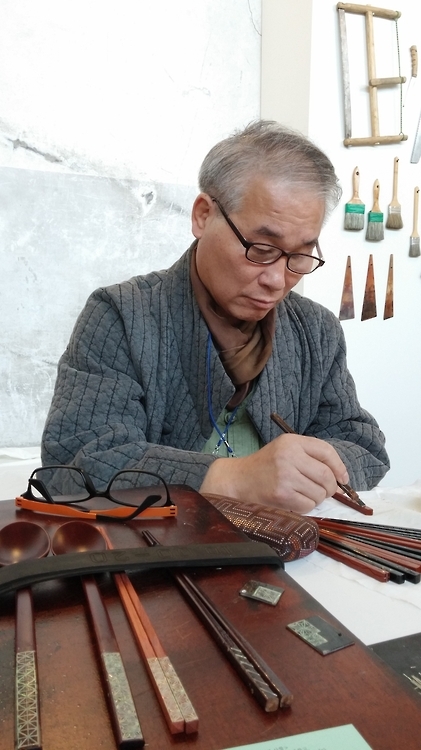 Outside the exhibition, various contests got under way to pick the best and fastest chopstick users.

Pan Yuanyuan from Qingdao won the contest for foreigners after piling up the most candies with her chopsticks.

"It feels great to win the gold prize," she said as she held on to a case containing a pair of chopsticks decorated with gold. "There are lots of Korean restaurants in Qingdao and I visit them often. I eat delicious food and use Korean chopsticks, which is how I got used to them and won the contest. At first, the Korean metal chopsticks were slippery but they became comfortable as I got used to them."

Korea, China and Japan have used chopsticks for over 1,000 years, but there have been differences in size and material. Chinese and Japanese chopsticks are made from wood, while Korean ones are made from metal and are always accompanied by a spoon because of the many soups and weighty food in the local cuisine. Chinese chopsticks are the longest with square ends, while Japanese ones are the shortest with pointed ends, and Korean ones rest halfway between the two in length.

At the children's contest, seven-year-old Jeong Ye-won looked delighted after winning the gold. Using only her chopsticks, she managed to stack up a tower of 13 honey cookies within a minute.

"I use chopsticks every time I have a meal. That's how I think I won the grand prize," she said. "I'm going to compete again in the elementary school division when I get there." 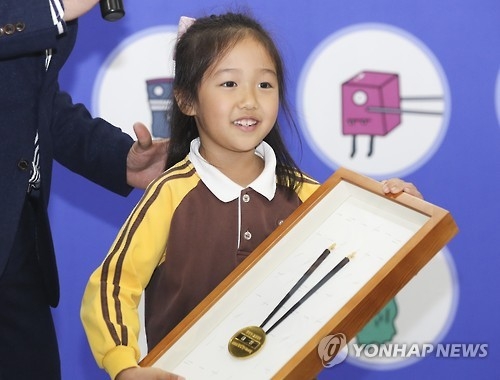