SEOUL, Nov. 15 (Yonhap) -- First love comes to everyone -- even if that person is a female weightlifter who has known nothing in her life but sports.

Weightlifting, a sport that's rarely featured in Korean dramas, will be one of the main subjects of the upcoming MBC series "Weightlifting Fairy Kim Bok-joo."

But there is also a coming-of-age story to be told through the protagonist and her friends.

"Our drama is an essay about the first love of a 21-year-old athlete called Bok-joo whose entire life has revolved around weightlifting," Yang Hee-seung, the drama's screenwriter, said during a press conference at MBC headquarters in western Seoul. "It's a healthy youth drama about the fierce self-challenges of sport university students, their real concerns and growing pains."

Bok-joo (Lee Sung-kyung) is a weightlifting student in the 58-kilogram division at Hanoel Sport University. Her goal in life is to win a gold medal. But after meeting the sweet and handsome weight clinic doctor Jeong Jae-i (Lee Jae-yoon), she finds herself wondering if he could ever hold her calloused hands or see her as a woman. 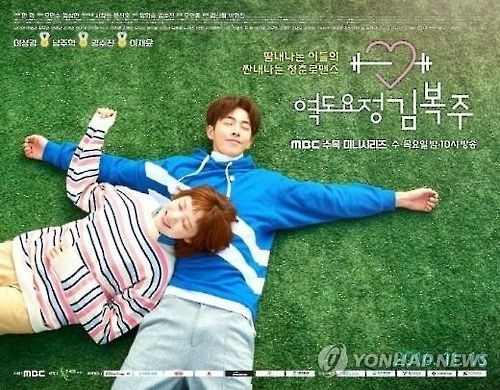 "People have a biased view of weightlifting as a sport for female athletes," Yang said, noting that she is a big fan of sports. "Paradoxically speaking, even women who do such physically demanding sports must experience love, and I thought that their stories of first love might have a different quality."

The veteran writer confessed that she discovered her own bias about the sport as she met with female weightlifters who turned out to be much more girly and sensitive than she had expected them to be.

For Lee, a model and actress, playing the part of Bok-joo required her to gain weight and muscle mass. Although she trained with weightlifting coaches and students, she acknowledged that viewers may not be entirely convinced at first.

"I tried to build the body of a healthy, sporty college student, rather than a chubby image," she said. "I thought hard and I know about the awkwardness (viewers) may feel, so I put in a lot of effort."

Director Oh Hyun-jong praised the actress, saying he personally feels that she portrays Bok-joo in a realistic and lovable way.

"I thought hard about which actress could play the title role and reveal her body as an athlete," he said. "I realized it may be difficult but asked Sung-kyung to do it because I believed she could pull off the image of a sport university student with her healthy and bright image."

He stressed that in preparing the cast for their roles, he focused on getting their postures right. In the case of Nam Joo-hyuk, who plays the male protagonist and swimmer Jang Joon-hyung, he sometimes had to swim all day for a shoot.

Nam is also a model and actor and has portrayed a swimmer in a previous drama.

"I began to wonder if I might end up becoming a real swimmer," Nam said jokingly. "I can swim enough at least to survive anywhere."

Nam's character is childhood friends with Bok-joo. After going their separate ways, they meet again at university and quibble with each other at every opportunity before eventually falling in love.

"Weightlifting Fairy Kim Bok-joo" will premiere at 10 p.m. Wednesday with new episodes airing every Wednesday and Thursday. Should viewership exceed 10 percent, the cast promised to hold an event for their fans. 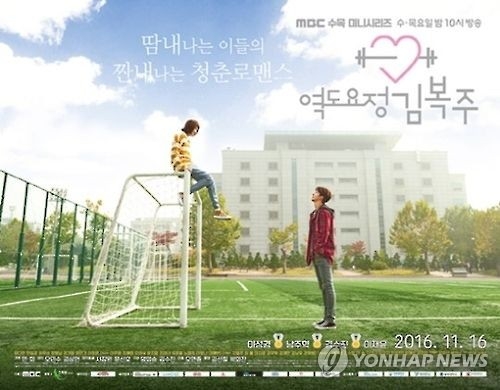 New sports drama to revolve around youth and love

New sports drama to revolve around youth and love