Although Kim jokingly told reporters at a press briefing Tuesday that he likes the dots largely because it is "easy and simple to draw," there is, in fact, a much deeper philosophy attached to his more-than-three-decade dedication to and obsession with them.

In his new exhibition, which opened on Tuesday and runs through Dec. 30 at the Kukju Gallery in Samcheong-dong, Seoul, he gives his signature theme a delightful and positive twist by casting them in much brighter colors.

While his previous dots were used to "damage and crack" Modernism ideas, those in his recent paintings are more or less intended to symbolize his yearning for a Utopian world, he said. 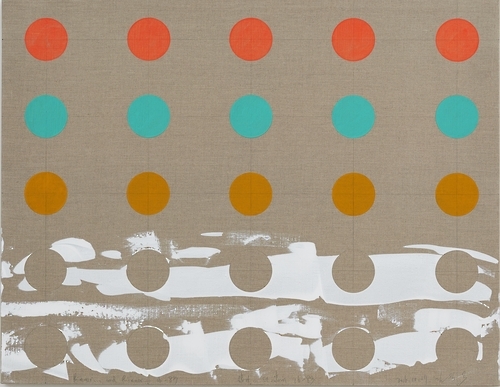 All together, 30 new pieces, created between 2015 and 2016, are on display at the gallery. Some of them look bare or even incomplete, which the artist said was done on purpose.

"I often stop painting in the middle of the work. It doesn't look good enough at first but I often realize that it is exactly what I am looking for. Things that look incomplete later bring themselves back to life, very refreshingly so, and create a new chance," the artist said.

A closer look reveals that some of the dots are not even perfectly round with paint out of the circle. The artist just leaves what might strike as a mistake as it is. The white canvas is tainted -- again, intentionally so -- with spilled-over paint or smudged flowers and leaves.

"Artists are dreamers. Things that look trivial in artwork should be carefully watched and interpreted. Otherwise art's messages won't be delivered as powerful as they should be," he said, adding that the intentional incompleteness is also to have some small breathing room in the rat race of modern life. 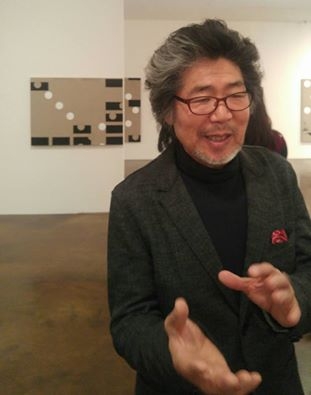 Through his new dot series, the "reinterpretation of my past works" as the artist calls it, Kim tries to express the blurred line or the clash between the Utopian dream and grim reality, and the "uncanniness" of them all, he said.

Exploration into life has been what Kim has consistently delved into since he started his career as an artist in the 1970s. For more than 40 years, Kim, now 69, has created artwork with topics as varied as modernism, conceptual art, politically charged paintings and public artwork. His works are collected in numerous museums including the Gwacheon branch of the National Museum of Modern and Contemporary Art (MMCA) and the Tokyo Metropolitan Art Museum.

"The purpose of the exhibition, I would say, is to show the world where dreaming about a Utopian society and the realization of its impossibility coexist," he said. "It looks cheerful but empty at the same time. That is our life." 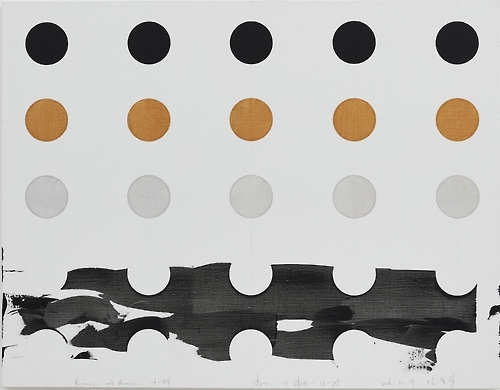