MEXICO CITY, Dec. 1 (Yonhap) -- South Korea will open a two-day inaugural festival on Korean culture in Mexico City this week aimed at helping local people become more familiar with and enthusiastic about many aspects of South Korea and its culture, organizers said Thursday.

The festival, which will run from Saturday on streets in and around the Mexican capital's Zona Rosa, better known as the city's Koreatown, is being organized by the Mexico-based Korean Culture Center.

Its opening ceremony will be held on the main stage between Hamburgo and Genova streets in the Zona Rosa at noon on Saturday, followed by performances of "samulnori," a Korean traditional percussion quartet, traditional dances, traditional martial arts taekwondo demonstrations, K-pop music and a piano concert. 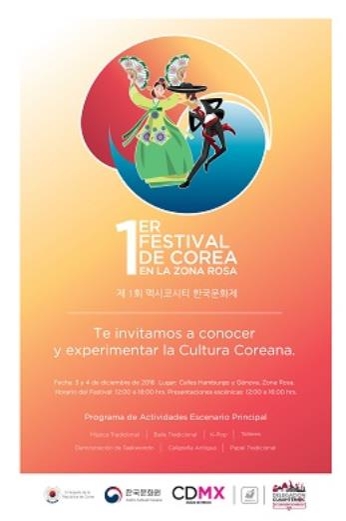