MOKPO, South Korea, Dec. 8 (Yonhap) -- To celebrate the tale of early 19th century Korean shipwreck survivor Moon Sun-deuk (1777-1847), a four-day festival opened on Thursday on Ui Island off the southwestern coast city of Mokpo as part of efforts to promote peace in the East Asia.

After their boat was struck by a typhoon in 1801, Moon, a ray merchant who lived on the island, drifted to Japan's southern island of Okinawa with his uncle and four other colleagues, and then ended up seeing the Philippines, Macao and China. They were hit by the typhoon while on their way home from another island nearby after purchasing some fish known as "hongeo," a delicacy in the region.

They managed to get their damaged boat to Okinawa, which at that time was the Ryukyu Kingdom that had diplomatic ties with the Joseon Dynasty. The survivors absorbed the local language and culture for eight months before trying to return home aboard a China-bound ship.

But that ship was wrecked again on its way to China, and they washed up on the shores of the Philippines, where the Koreans stayed for nine more months. Eventually they made it to Macao and then embarked on a 14-month trip that took them Nanjing, Beijing, and Joseon's Uiju before coming back to their hometown in January 1805. 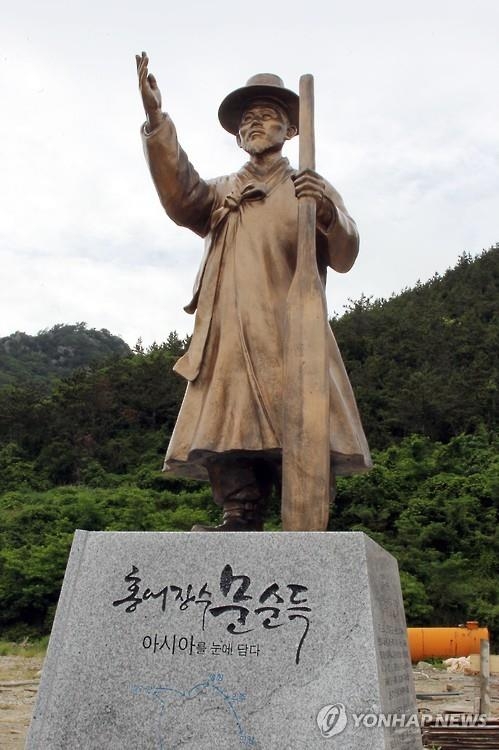 A scholar named Jeong Yak-jeon (1758-1816), exiled at the time, recorded the merchants' tale in his book, "Pyohaesimal" (The Records of Sea Drifting), which detailed the lifestyles, ships, souvenirs and climate that they saw, as well as the itinerary of their odyssey.

Moon had a flair with foreign languages as he acquired the languages of the countries he visited, and a sharp eye for the way foreign people lived. He displayed splendid memory skills as well.

It was thanks to his interpretation skills that five Filipino people, who were shipwrecked off Jeju Island on the South Sea in 1801, were able to return home nine years later. The Filipinos were repatriated to China first but sent back to Korea because they were not recognized as Chinese.

Moon, who made himself understood to the foreign people, was instrumental in helping them start on a homeward journey.

During the festival, organized by a civic body that promotes street art, scholars and experts from South Korea, Okinawa and the Philippines will gather to discuss ways to seek peace in the East Asian region.

Other events include a memorial paying tribute to Moon at his birthplace on the South Korean island, folklore performances by the three countries and an international seminar.

The organizers plan to invite representatives from Macao and China to the festival next year in a bid to fulfill its proposed aim of promoting regional peace based on the remarkable life of the Korean man.