The meeting took place after a proposal for the meeting was passed in a 9-5 vote. Those who voted for the sessions were the United States, Britain, France, Japan, Malaysia, New Zealand, Spain, Ukraine and Uruguay, while those opposed to it were China, Russia, Venezuela, Egypt and Angola.

It is the third time the Security Council has taken up the issue.

In 2014, the council held its first-ever meeting on the North's human rights issue after the adoption of a landmark U.N. General Assembly resolution calling for referring the communist nation to the International Criminal Court (ICC). The council held a similar meeting in December last year. 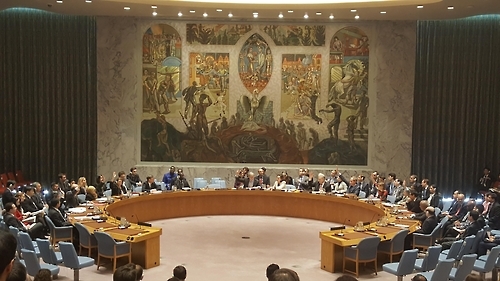 "This is a matter of great concern that demands our attention. The magnitude and scale of abuses suffered by the people of DPRK have been documented by the Commission of Inquiry in 2014," U.N. Deputy Secretary-General Jan Eliasson said.

Eliasson also noted that the Security Council's latest sanctions resolution on North Korea, which was adopted last week in response to Pyongyang's fifth nuclear test, specifically requested for the first time that the North should respect and ensure the welfare and inherent dignity of its people.

Japanese U.N. Ambassador Koro Bessho said there is a "clear linkage" between human rights violations in the North and instability in the region, adding that addressing root causes of the threat to international peace and security "falls undoubtedly within the mandate of the Security Council."

"Regrettably, there is no indication that the DPRK authorities have moved to improve the human rights situation on the ground," Bessho said. "Therefore, efforts by the international community to ensure accountability are needed."

"Beyond North Korea's borders, there lies another tragedy. It's the tragedy of tens of thousands of North Koreans forced to work abroad to raise money for the regime in circumvention of U.N. sanctions. It is estimated this practice raises as much as $2 billion in foreign currency each year," the envoy said.

"The U.K. government is committed to ridding the world of this scourge," he said.

South Korea's new U.N. ambassador, Cho Tae-yul, pointed out the North's "brazen and shameless" behavior of spending US$200 million on the two nuclear tests and 24 missile launches this year alone while asking for international aid for flood victims.

"The DPRK's reckless pursuit of developing nuclear weapons is not only a serious threat to international peace and security, but also a grave human rights problem that threatens the very survival of its people already at risk," Cho said.

The envoy also called for continued pressure on Pyongyang, saying failing to do so would be "tantamount to abetting the most systemic, widespread and gross human rights violations on the globe."

"The North Korea leader must realize before it's too late that time is not on his side. He must listen attentively to the solemn voice of reason resonating in this chamber today and that is the darkness can never defeat the light," he said.