Unlike light and heavy water nuclear reactors, which are widely used for now, a nuclear fusion reaction provides safer electricity as it produces low levels of radioactive waste.

Along with the United States, the European Union, Japan, Russia and China, South Korea is a part of an international consortium aimed at building a commercial nuclear fusion reactor. 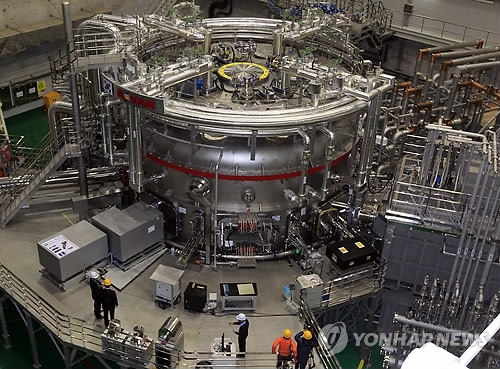 In a statement, the National Fusion Research Institute, a Korean state-run research center in charge of the projects, described the fusion reactor's achievement as a "huge step" in commercializing nuclear fusion technology.

"A world record of high-performance plasma for more than a minute demonstrated that the KSTAR is at the forefront of steady-state plasma operation technology in a superconducting device," the institute said in the statement.

"This is a huge step forward for the realization of the fusion reactor," it said.

A project named the International Thermonuclear Experimental Reactor (ITER), led by the six members of the international consortium, had been originally planned to build a commercial nuclear fusion reactor by 2015, but it has been delayed due to technical difficulties.

"With the progress of ITER project, the KSTAR research will focus on the mission essential for the fusion reactor beyond the ITER," the institute said.

The institute said there are "new efficient mode of operation and new divertor concept suitable for the Korean fusion demonstration reactor, K-DEMO device which will be the first runner in worldwide fusion energy development plan."

Kim Keeman, head of the institute, said, "We will exert efforts for KSTAR to continuously produce world-class results and to promote international joint research among nuclear fusion researchers."
(END)