SEOUL, Dec. 19 (Yonhap) -- South Korea's Air Force has upgraded the capability of its F-16 fighter jets by equipping them with bombs and missiles capable of hitting key underground facilities in North Korea and shooting down combat aircraft at long range, officials said.

The completion of the upgrade enables the South Korean jets to fire AIM-120 mid-range air-to-air missiles, according to the Air Force. The missiles have a range of 50 to 180 kilometers.

They will also be equipped with GBU-31JDAM (Joint Direct Attack Munition) air-to-ground guided bombs, which can hit underground military facilities and neutralize the North Korean leadership in the event of an emergency, it added.

The F-16 Peace Bridge Upgrade (PBU) project is part of the Air Force's efforts to enhance the overall capability of its frontline jets.

The U.S.-made F-16 fighter jets have played a key role in conducting air operations for the South Korean Air Force since their introduction in 1986.

But the need for the upgrade has been raised as existing electronic equipment on planes has been halted and precision weapons such as guided bombs cannot be installed in the original models, it said.

In November 2009, South Korea inked a deal to upgrade the F-16 combat planes with Lockheed Martin Corp. A total of around 30 jets have been improved since October 2013.

"The upgraded F-16 PBUs will have the same capability of the KF-16 jets and will operate as the main combat planes charged with defending South Korea's air," said an Air Force official 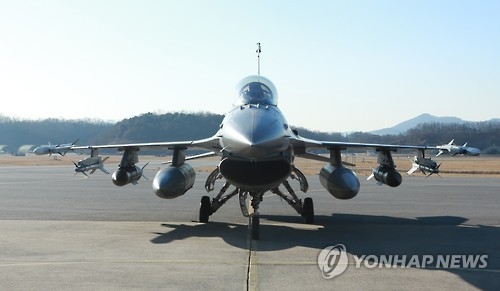