"I wasn't kidding when I said Cha Tae-hyun's legs were pretty. When you look at his legs from the back, they're really long and slim," Kim said Monday at an event held for fans at Lotte Cinema near Seoul's Konkuk University, according to Next Entertainment World.

The fantasy-comedy flick follows the story of a genius composer, played by Cha, who gains the ability to transfer into other people's souls after an accident. With this superpower he acts as a love messenger to pull together the hearts of those who are inexperienced in love. Kim plays a high school student who serves as his assistant.

This is not the first time the two have worked together. Cha previously had a cameo in the first episode of the epic romance drama "Love in the Moonlight," where Kim played the lead. Fans are looking forward to seeing their great chemistry once again in this comedy film.

"Because I Love You" is slated to be out in local theaters on Jan. 4. 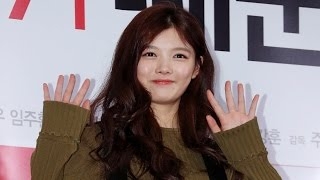