SEOUL, Dec. 27 (Yonhap) -- The deadly sinking of the Sewol ferry two years ago was an accident, which left 295 dead and nine missing, not caused by the ship colliding with a submarine, the Navy said Tuesday.

The response comes after an online commenter named "Zaro -- Netizens' investigation team" argued that the ferry sinking was the result of the the passenger ship hitting a submarine in a nearly nine-hour-long documentary released Monday via YouTube.

But the Navy flatly denied the documentary as being based on "groundless" suspicions, saying there was no submarine in operation or conducting drills in the nearby waters on April 16, 2014, when the accident took place.

"The waters are 37 meters deep on average and not suitable for submarine action due to rapid currents and heavy commercial shipping and fishing boat traffic," the Navy said in a statement. 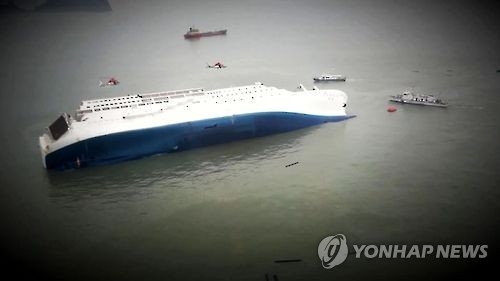 In the documentary, the commenter pointed out that the route taken by the ill-fated ferry didn't match conventional routes and external factors such as a submarine collision can explain the disaster.

He claimed an errant sub collided with the Sewol based on his analysis of radar recordings and the Navy may have concealed the submarine crash in order to achieve its goal of sailing 2 million miles without an accident.

In 2015, the Navy set a new record for sailing some 2 million miles for 23 years without any serious accidents.

The government has steadfastly maintained the accident was caused by overloaded freight, the crew's lack of experience in navigation and outdated safety features on the ship.

"We are considering filing a suit against the netizen Zaro and Kim Kwan-mook, a professor at Ewha Womans University, for spreading false information and defamation of submarine crewmembers," a Navy official said.

The nanoscience professor also argued that radar data showed there was something near the ferry on the day of accident and it was a submarine passing by. The radar data was not confirmed by the Navy.