"The latest drone is 'Banghyun 5' which was produced at a local airplane repair plant," he said.

The Banghyun 5 is a stealth drone made of titanium and carbon composites under the guidance of the country’s leader, according to Kim. With a 900-liter fuel tank, the 1.5-ton drone can fly up to 10 hours at a height of 4 kilometers and speed of 200 kilometers per hour, Kim said.

The North has been improving the stealth functions of unmanned aerial vehicles since 2000. The Banghyun 5 is designed to deliver a so-called dirty bomb based on enriched uranium to South Korea's presidential office Cheong Wa Dae and other major facilities or kill key enemy targets, he said.

The communist regime has been developing a variety of strategic weapons including an unmanned long-range aerial vehicle that could reach the United States and a nuclear-powered submarine that can carry submarine-launched ballistic missiles, the executive director said.

However, South Korea's military said it does not have any information on the North's development of such advanced drone weapons.

"The specifications of North Korea's unmanned aerial vehicle still lag far behind those of other advanced countries," it said. 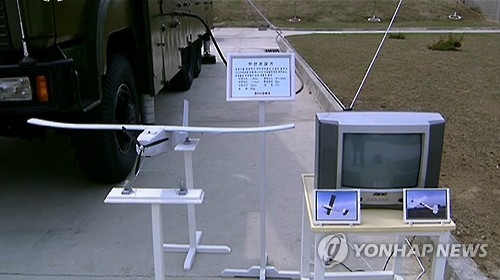