SEOUL, Jan. 1 (Yonhap) -- South Korea's acting President and Prime Minister Hwang Kyo-ahn said Sunday that the security of the country rests on the shoulders of its armed forces.

In a video message sent to troops, Hwang emphasized the grave security situation facing the country.

There has been growing speculation that North Korea will engage in some form of provocation in 2017 after detonating two nuclear devices in 2016 and firing off scores of ballistic missiles.

"The people have faith in the strong willpower and military readiness of our troops," he said in the New Year's message.

Hwang said as the acting chief executive he has the utmost faith in the troops, and the government will spare no expense in supporting the armed forces.

The prime minister has taken on the responsibility of president as of Dec. 9 after an impeachment motion was passed by parliament against President Park Geun-hye for alleged corruption involving her close friend of over 40 years.

The acting president then said he had recently visited a front-line outpost along the land border with North Korea and felt assured by the dedication to duty shown by troops stationed there.

Park, who has been suspended from exercising her powers, sent video messages or talked to commanders of military units on New Year's Day after taking office in early 2013.

Meanwhile, Hwang delivered his New Year's address to the nation at midnight in which he vowed to focus on "stably" managing state affairs.

"(I) will humbly accept the people's wishes and do my utmost to manage state affairs while thinking about the future of our nation," he said in the address.

He also stressed that realizing unity and integration among Koreans is a crucial national task he must deal with. 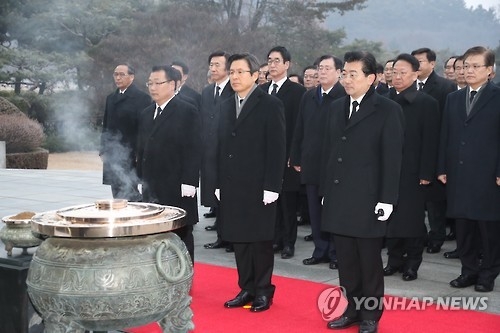 In the visitors' book, Hwang expressed hopes that the country can "make another leap forward to new hopes and challenges."