The country's exports reached US$495.5 billion in 2016, while its imports dropped 7.1 percent on-year to $405.7 billion, according to the data released by the Ministry of Trade, Industry and Energy.

It is the first time in 58 years that South Korea's exports finished in negative terrain two years in a row.

The country's exports had been in a deep slump for the 19th consecutive month since January 2015, but they started to show some signs of recovery in November when they logged a 2.5 percent gain.

All key exporting items except for personal computers posted minus growth in exports last year, hit hard by the global economic downturn.

Exports of semiconductors edged down 1.3 percent on-year in 2016 and wireless devices, including mobile phones, backtracked 9.1 percent, while outbound shipments of cars slumped 12.5 percent and those of auto parts dipped 4.4 percent.

By region, shipments to Vietnam soared 17.6 percent last year from a year earlier, to some extent offsetting the 9.2 percent drop in exports to China and a 4.8 percent fall in the United States. China and the U.S. are South Korea's first and second-largest trading partners.

But the trade ministry noted that the country's exports made a significant rebound in the fourth quarter on recovering demand and rising crude prices, raising hope for a turnaround in 2017.

During the October-December period, exports rose 1.9 percent on-year, making the first plus figure in two years on the back of a 10.7 percent gain in chips and a 3.4 percent rise in steel. 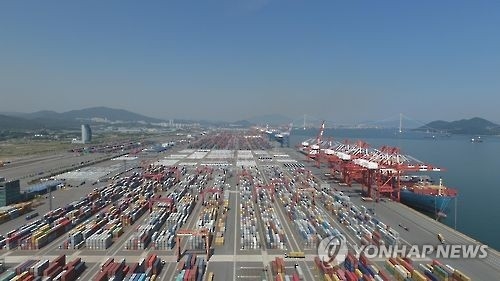 Semiconductors and petrochemicals led the upturn in exports, with shipments of chips surging 19.9 percent on-year and those of petrochemicals and flat displays jumping 8.4 percent and 12.2 percent, respectively.

Exports of wireless devices and cars fell 2 percent and 7.9 percent, respectively, partly because of the production halt of Samsung Electronics Co.'s Galaxy Note 7.

Exports to China gained 9.6 percent to a 14-month high of $12 billion last month, following a 0.4 percent gain in November, on economic recovery in the world's second-largest economy.

For next year, the trade ministry forecast that South Korea's exports will rise 2.9 percent on the back of a global economic recovery and rising demand for key items such as flat screens and chips. Imports will likely expand 7.2 percent next year, with a trade surplus reaching $74 billion.

"Recovering world trade stemming from an upturn in the U.S. and big emerging economies will contribute to an uptick in South Korea's exports, coupled with price hikes in key exporting items," the ministry said.

"But downside pressures like strengthening trade protectionism and China's rebalance are still areas that the country needs to deal with."