The special prosecutors have decided to apply the arrest warrant against Ryu due to the possibility of him attempting to destroy evidence, a source said. 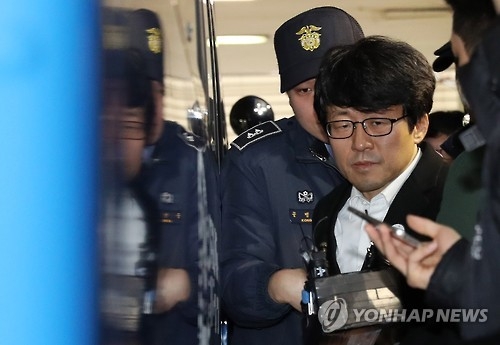 The team said it will summon Song Kwang-yong, former senior presidential secretary for education and culture, on Monday to get more information about the blacklist. The independent counsel team hinted that it is also considering summoning Song Soo-keun, the current vice culture minister who is suspected of managing the alleged blacklist.

"Vice Minister Song is also under the independent counsel's probe," an official at the probe team told reporters, declining to be named.

Over the weekend, the independent counsel team accelerated its probe into the corruption scandal as it questioned a series of figures implicated into the case.

The team questioned Moon Hyung-pyo, the chief of the National Pension Service (NPS), over suspicions that he pressured the state fund in July last year to back a merger deal between Samsung Group's two units when he was the health minister.

It queried Moon for 12 hours on Saturday after detaining him the same day.

A source with knowledge about the ongoing probe said that Moon had stated that he directed the NPS to back the merger deal after "consultation" with the presidential office Cheong Wa Dae.