According to the film's distributor CJ E&M, the very strong showing was reached 13 days after its official release. It said the tally was taken at 7 a.m. on Sunday and reflected weekend sales.

The distributor also said that for a film released in December, Master reached the landmark 5 million mark in the shortest period of time, which is a testament to the appeal of the movie with local audiences.

Since it hit the silver screen, Master has captured 43.6 percent of South Korean box office sales.

Besides strong numbers at home, its lead actors Kang Dong-won and Kim Woo-bin as well as the director are expected to go on a promotional tour through Asia. The tour will be held in Hong Kong and Singapore later this month where the stars will be able to meet with prospective moviegoers.

The movie portrays an intellectual war between a con man, his sly right-hand man and a police investigator over a major financial scandal. 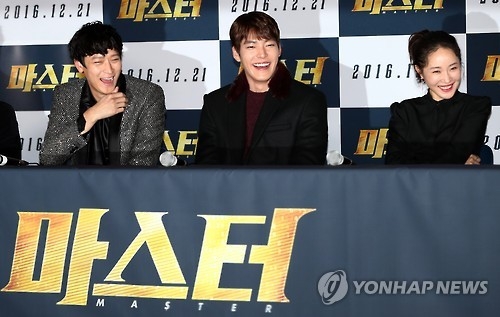