SEOUL, Jan. 1 (Yonhap) -- Acting President and Prime Minister Hwang Kyo-ahn on Sunday called for "differentiated and tailored" quarantine and sterilization efforts to contain the avian influenza (AI) that has ravaged poultry farms across the country since mid-November.

During a daily meeting on AI, Hwang also stressed the need for more "scientific and systematic" quarantine activities through experts' counseling and a more thorough analysis of specific features of poultry farms.

"Beyond the basic quarantine activities, we should carry out effective, tailored quarantine measures that are differentiated based on the specific features of species such as chickens and ducks, and regional differences," Hwang said. 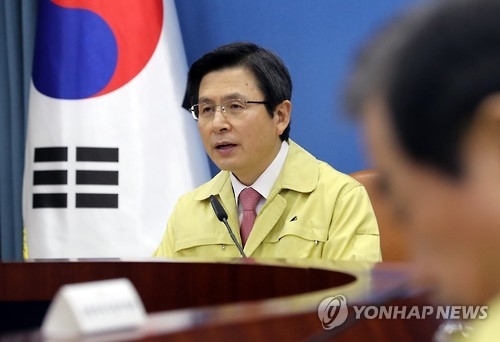 Although he pointed out that the nation's all-out quarantine efforts have helped reduce the number of suspected AI cases, the acting president voiced concerns that the virus has been detected in other types of birds such as quail.

Hwang, in addition, underscored the need to strengthen sterilization efforts in habitats for migratory birds, zoological parks and hunting zones.

"AI has yet to be contained, so do not loosen vigilance and take every step to prevent another AI outbreak," Hwang said.

To prevent additional AI outbreaks, authorities have culled more than 28 million chickens and other poultry since the first outbreak was recorded on Nov. 16.

Meanwhile, a highly pathogenic strain of bird flu was discovered in two dead cats on Saturday, marking the first infection of the virus found in mammals in two years.

The H5N6 strain of AI was found in the bodies of the cats in Pocheon, some 46 kilometers north of Seoul, a provincial government official said, citing information from health authorities.