SEOUL, Jan. 1 (Yonhap) -- Former President Lee Myung-bak on Sunday unveiled his plan to leave the ruling Saenuri Party early this year to remove his "political hues," dealing another blow to the feud-ridden party that has been dominated by loyalists to impeached President Park Geun-hye.

During a meeting with reporters at the Seoul National Cemetery, Lee also said that he is not considering creating a new political entity or joining the new party that dozens of Saenuri defectors plan to launch later this month.

"I think I, as a former president, have done enough (as a party member). My departure would mean that I will eliminate political hues," he added.

Lee also expressed hope that politicians, regardless of their ideological orientations, can engage in "honest" political activities to better serve citizens in the New Year.

Chung Woo-taik, the floor leader of the Saenuri Party, expressed displeasure about Lee's decision to quit the party, but dismissed concerns about any negative impact of his planned departure on the party.

"I don't think there would be any big impact (of Lee's decision to quit the party)," Chung told reporters. "I will move forward with conviction that (I) can revive the party."

Last week, nearly 30 lawmakers, who had long been at odds over loyalists to Park over a number of issues, left the party and vowed to launch a new party, tentatively named the "New Conservative Party for Reform" on Jan. 24. 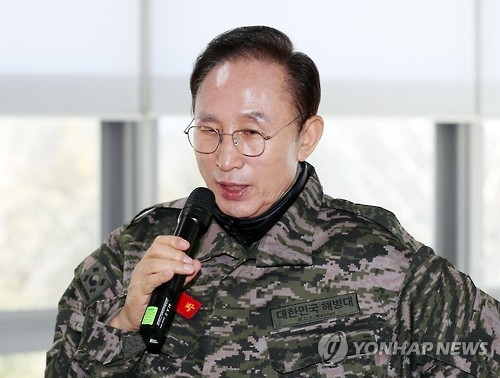