SEOUL, Jan. 1 (Yonhap) -- A South Korean naval aircraft accidentally dropped anti-ship missiles and other weapons into the sea on Sunday, although the incident did not cause any damage to civilians, the military said.

The Navy said one of its P-3CK four-engine anti-submarine and maritime surveillance aircraft reported dropping three Harpoon missiles, a torpedo and depth charges while on a routine mission over the East Sea.

"One of the plane's crew mistakenly touched the emergency weapons release switch at around 6:10 a.m.," an official source said. The weapons fell into waters 30 miles east of Yangyang on the country's northeastern coast.

"There was one fishing boat in the area but it sustained no damage," he said.

The Navy said that the weapons were not armed when they were released so there is little danger of them exploding by mistake.

It said a mine sweeper and salvage ship have been sent to the area to retrieve the weapons.

Authorities said that since no mechanical defects caused the release of the weapons the P-3CKs will carry out regular patrols, although closer inspections will be conducted in regards to operations to ensure that such accidents do not occur again in the future. 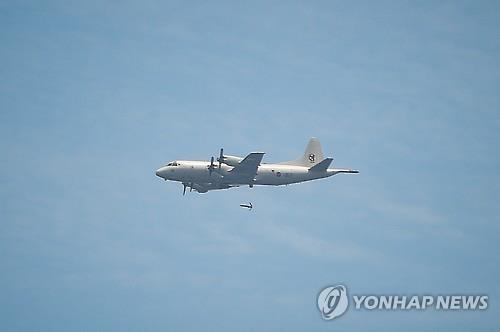