SEOUL, Jan. 1 (Yonhap) -- President Park Geun-hye on Sunday denied allegations against her of involvement in a corruption scandal surrounding her longtime confidante, as the Constitutional Court accelerates its legal review of her impeachment case.

The president expressed frustration at what she termed "distorted and false" suspicions and "erroneous" media coverage, during the New Year's greeting meeting with reporters, the first such event since she was impeached on Dec. 9 over the highly-charged scandal.

Park also vowed to "conscientiously" respond to the ongoing probe, which Independent Counsel Park Young-soo launched last month to look into multiple charges against the president, including abuse of authority, coercion and leaking of official secrets. 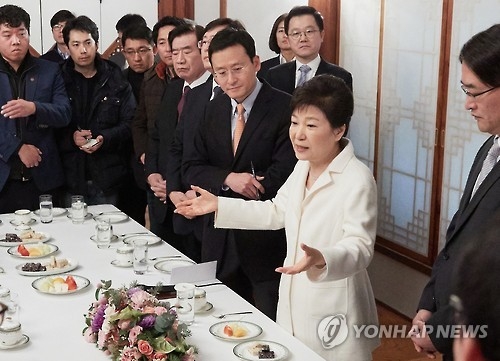 Last month, Park's attorneys already repudiated all charges against her, urging the Constitutional Court to overturn the parliament's impeachment decision. The court will determine whether to unseat Park or reinstate her after a legal review that could last up to six months.

Park has faced charges that she allowed her friend Choi Soon-sil -- without any government post or security clearance -- to meddle in important state affairs, including top-level personnel appointments.

The president is also suspected of playing a role in pressuring large local conglomerates such as Samsung Group and Hyundai Motor Group to dole out large sums of money to two non-profit foundations that have been found to have links with Choi.

Investigations so far found Choi did not take any money from the Mir and K-Sports foundations, with state prosecutors charging her with conspiracy to commit fraud. Choi, however, did receive money from the Samsung Group in the form sports-related sponsorships.

Another charge is about Park's alleged inaction during a 2014 ferry disaster that left more than 300 passengers, mostly young students, dead or missing.

During the meeting with the press, Park, in particular, dismissed the bribery allegations that Samsung made massive donations to the two foundations in return for the presidential office's backing of the conglomerate's push in 2015 to merge its two units -- then-Samsung C&T Corp. and Cheil Industries Inc.

"Samsung's merger was, at the time, an issue of public interest. Citizens closely watched the situation at the thought that if (the merger plan) fell apart due to an attack from a hedge fund, it could be a big national, economic loss," she pointed out.

"Whatever decision (the government made), it was in the best interest of the country. But in the (decision-making) process, I have never ordered anyone to give help here and there," she said.

"There are duties and judgments that the president is obliged to make. How can they make the (accusations) that (my) acquaintance had done everything?" she said, stressing she has run the country "based on her own philosophy and conviction."

The president, in addition, denied the suspicion that she directed her former secretary to help a company -- run by Choi's acquaintance -- supply component parts to Hyundai Motor Co. She said she only came to know the company through media reports.

As to the allegations about the sinking of the ferry Sewol, Park reiterated that she carried out her official duties on the day of the tragedy. Rumors have persisted that she received plastic surgery or other treatments during the day.

Touching on her government's alleged blacklisting of artists and cultural figures critical of her government, she said she was not aware of it in the least.

Regarding the controversy about her medical treatments at the presidential office, Park said they were part of her privacy.

"It is embarrassing to reveal each and every single medication or pill I take. With this, I have never inflicted any damage to the country," she said.

Opposition parties wasted no time in denouncing the president's denial of corruption allegations.

The main opposition Democratic Party said that the denial represented her "extreme shamelessness." The minor opposition People's Party berated Park of adding to public concerns over the scandal on the first day of the New Year. 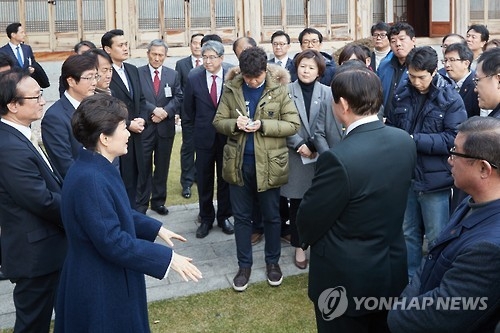