SEOUL, Jan. 1 (Yonhap) -- North Korea is likely to conduct missile provocations in the first half as the country announced that its preparation for test-firing an intercontinental ballistic missile (ICBM) has entered the final stage, experts said Sunday.

North Korean leader Kim Jong-un in his New Year's message claimed the country is in the final stage of preparing to launch an ICBM, heralding the country's intent to jack up tensions in coming months.

Pyongyang is known to be developing a road-mobile ICBM, known as KN-08, which has a range of more than 13,000 kilometers and may be capable of flying as far as the U.S. mainland. But the North has never conducted an actual test of that missile.

Experts said that North Korea will focus on advancing its nuclear and missile capability in the new year, raising the possibility it would be engage in more powerful provocations around its key anniversaries in the first half. 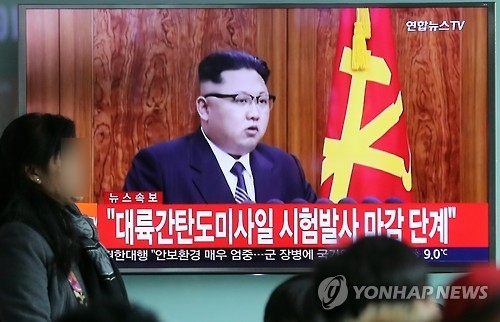 "In a bid to complete the development of ICBMs, there is a high possibility that North Korea will launch long-range rockets on several occasions this year," said Cheong Seong-chang, a senior researcher at the Sejong Institute.

"Pyongyang is expected to seek the completion of its ICBM technology this year by firing long-range rockets before South Korea's new administration takes office," he added.

For North Korea, the year 2017 is full of anniversaries which will highlight the three generations of rule by the family dynasty that started with late founder Kim Il-sung.

The current young leader's birthday falls on Jan. 8 and April 11 is the fifth anniversary of his election as the first secretary of the ruling Workers' Party of Korea (WPK). His current title is the WPK's chairman.

Other key commemorative days include the 105th anniversary of the late founder's birthday, which falls on April 15, and Feb. 16, the birthday of the incumbent leader's late father Kim Jong-il who would have turned 75.

Pyongyang has focused on making miniaturized and diversified nuclear weapons with the goal of developing a nuclear-tipped ICBM which can fly as far as the U.S. mainland.

Experts here are predicting that North Korea may even launch a brand new ICBM on a fresh rocket engine which Pyongyang claimed last year to have developed.

In April 2016, North Korea boasted it had successfully conducted a ground test of a high-powered rocket engine for a rocket with intercontinental range.

Analysts said at that time that the rocket can be used as the first stage booster of the ICBM, raising the possibility of a launch taking place in one or two years.

"Pyongyang may have developed a new ICBM similar to the KN-08 missile," said Kim Dong-yup, a professor at the Institute for Far East Studies of Kyungnam University. "It could attempt to launch it with a booster rocket to make it fly a shorter range of some 1,000 kilometer." 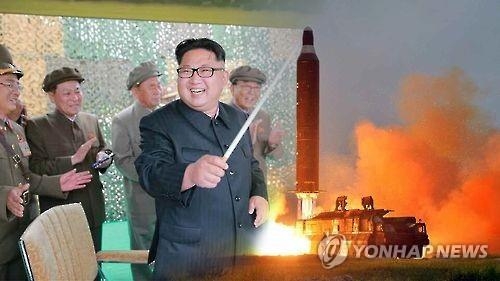 The U.S. intelligence community generally believes there is a low possibility that the North could field a successful road-mobile ICBM with a small nuclear device capable of reaching the U.S. mainland.

But U.S. Adm. William Gortney, the U.S. northern commander said in April that the North could have such a capability.

"North Korea would select the prime time for the maximum impact of its provocations and when its ICBM technology enters the stable stage," said a military expert, asking not to be named. "The country is likely to make provocations in the first half."

Meanwhile, the North's leader vowed to strengthen the capability of its nuclear programs and conventional weapons during his New Year speech.

"As long as the U.S. and its followers continue to pose nuclear threats, North Korea would keep increasing the military capabilities for self-defense and preemptive striking capacity with a main emphasis on nuclear force," he said.