NEW YORK, Jan. 1 (Yonhap) -- Ban Ki-moon has finished his 10-year term as secretary-general of the United Nations, putting the responsibility of tackling global challenges behind him, and is now eyeing a new dream of becoming South Korea's president. 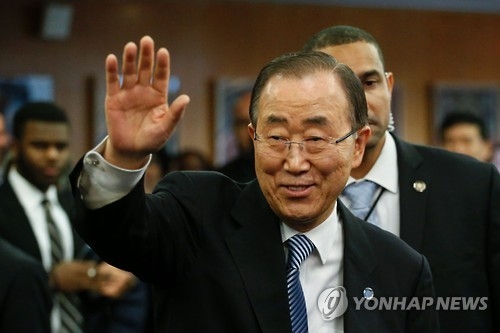 Ban's second five-year term expired at the turn of the new year, and the reins of the U.N. were officially handed over to former Portuguese Prime Minister Antonio Guterres, who was elected as Ban's successor in October.

While in office, Ban visited every corner of the globe, traveling to 154 of the 193 U.N. member states. The other 39 countries are those that are difficult to access, such as tiny island nations and North Korea, U.N. officials said.

Considering multiple visits to the same countries, Ban visited foreign countries a total of 559 times. The total travel distance covered in those trips amounts to 4.8 million kilometers, the equivalent of circling the globe 100 times, according to U.N. officials.

Ban has fulfilled a total of 34,564 appointments, with 17,066 of them meetings with heads of countries, international organizations and others, followed by 11,676 speeches at various events, 2,078 interviews and press conferences, and 3,614 phone calls.

That represents about 10 events and appointments a day. When the U.N. General Assembly was under way, Ban had to attend as many as 31 meetings and events a day.

The last event he attended as U.N. chief was the annual Times Square ball drop on New Year's Eve. Ban and his wife pushed the crystal button to begin the 60-second countdown to 2017, along with New York Mayor Bill de Blasio.

Ban plans to return to South Korea in the middle of this month.

Last week, Ban effectively declared his presidential aspirations, saying in a farewell press conference with Korean reporters that he is ready to give his all if it contributes to the development of the country.

Opinion polls have long shown Ban is one of the favorites in next year's presidential election. The election, which was originally scheduled for December, could take place much earlier if the Constitutional Court upholds the impeachment of President Park Geun-hye.
(END)