"The auto industry is facing more uncertainties than ever due to an increasingly spreading trade protectionism and growing global competition, while the global economy continues to face a prolonged slump," group chairman Chung Mong-koo said in his message for the new year.

"Therefore, the group plans to ensure its future growth by actively responding to changes in external conditions," he added.

The 2017 target marks a 1.5 percent increase from the 2016 target of 8.15 million for the group's two automaking subsidiaries -- Hyundai Motor Co. and Kia Motors Corp.

Chung said efforts to expand sales will include improving the competitiveness of its luxury vehicles and environmentally friendly cars.

Hyundai and Kia will also launch more than 10 new refreshed vehicle models this year to actively meet the changing taste and demand of global consumers, he noted.

The carmakers have said the new vehicles to be launched this year will include at least one SUV from each.

Still, many believe the sales target may be anything but attainable.

Hyundai and Kia said they have missed their 2016 target, selling only some 7.88 million cars together globally that marked a 1.7-percent drop from a year earlier.

Such an ambitious plan follows a series of reports that forecast a further slowdown in the global auto market.

An earlier report from Hyundai Motor Group itself has said global auto sales were estimated to have expanded 3.6 percent on-year last year, largely helped by a temporary reduction of the excise tax on new cars sold in China by 5 percentage points, which in turn helped expand the Chinese market by 15.5 percent in 2016.

The report noted the Chinese government may extend its temporary tax reduction, but only by 2.5 percentage points this year.

Consequently, the world's largest market for automobiles is expected to expand only 4.4 percent in 2017, according to the report. 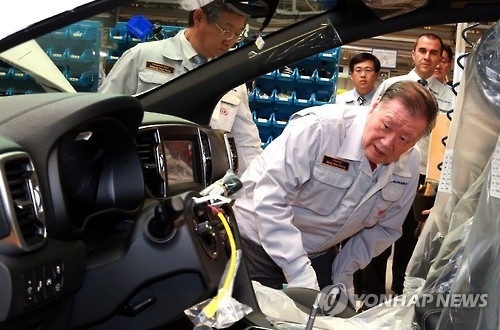