SEOUL, Jan. 2 (Yonhap) -- A gloomy outlook for the domestic real estate market this year is spreading on fears of rate hikes and excess supply, according to market watchers Monday.

An earlier government attempt to revive the local economy through a property market boom has fizzled out, leaving the country with mortgage loans that threaten the health of the national economy, they said.

According to the Bank of Korea and the Korea Center for International Finance, Citigroup, in a recent report, projected price falls in metropolitan areas from an increase in the housing supply. The market estimate is that there will be some 368,000 new apartments available between this and next year, way above the average 235,000 for the years 2012-2016, as well as the annual demand of 240,000.

Credit Suisse Group in its report said any pickup in the property market since mid-2013 is tapering off.

Watchers say the slowed increase in household income has already crimped housing affordability, and the likely key rate hikes will further strike down the market. Credit Suisse predicted that an increase of 0.25 percentage point in the mortgage loan interest rate from 2.8 percent of the third quarter last year would bring down the housing affordability index by 2.3 percent. A 1 percent increase in the interest rate would mean an 8.8 percent plummet in the index, according to the investment bank.

Such outlook is already prevalent among consumers. A consumer sentiment survey last month by the central bank of 2,200 households showed a majority of respondents predicting a fall in real estate prices. The consumer sentiment index on housing dropped from 107 in November to 97 in December, the first time that it stopped at below 100 since February 2013.

Market watchers say the strengthened guidelines on loans, to apply in phases at all lending institutions this year, will further crimp the market, holding back any upward price rise. 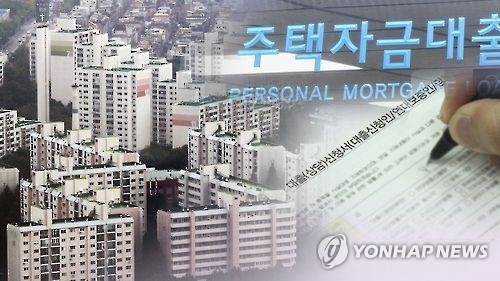