SEOUL, Jan. 2 (Yonhap) -- Rep. Lee Jung-hyun, former head of the ruling Saenuri Party, left the party Monday, bowing to pressure from a new interim leader of allies of President Park Geun-hye who wants to clear the deck and restore the conservative party.

"As the immediate former chief, I will take all responsibility and leave the party," Lee said.

Saenuri faces its biggest crisis with the president impeached by parliament on Dec. 9 over a raft of corruption and influence-peddling allegations. A group of 29 lawmakers left Saenuri last month to establish the tentatively named New Conservative Party for Reform.

Lee had stepped down from his post in mid-December with other leaders to take responsibility for the passage of the impeachment motion.

Park was impeached amid suspicions that her confidante Choi Soon-sil exercised influence over key state affairs and used her ties with Park for financial gains and personal favors. State prosecutors identified Park as an accomplice.

Lee said he does not want to become a hurdle for In Myung-jin, head of the emergency leadership panel.

A Saenuri spokesman said with the departure, Lee is showing his willingness to sacrifice himself for the party's reform and take responsibility for its past wrongdoing.

Last Friday, a day after his appointment, In called on core pro-Park members to take responsibility for causing the party's crisis and leave voluntarily by Jan. 6.

Political pundits said Lee's decision appears to be designed to contain the scope of an In-led purge of Park-loyalists. 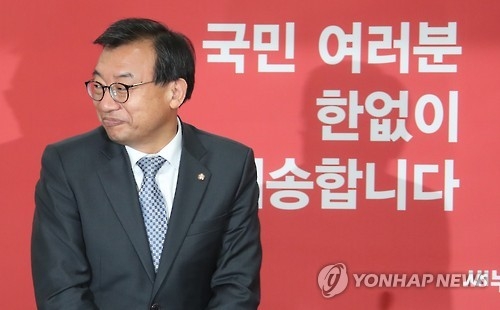