SEOUL, Jan. 2 (Yonhap) -- Acting President and Prime Minister Hwang Kyo-ahn on Monday reiterated the need for "bold, preemptive and swift" actions to contain the avian influenza (AI) that has spread across the country since mid-November.

During a daily meeting on AI, Hwang also noted a recent decrease in the daily number of suspected cases, while directing quarantine officials to maintain the principle of culling poultry within 24 hours in an area where an infection is detected.

"In accordance with the principle of slaughtering poultry within 24 hours, we have to boldly and swiftly end the case, and also carry out follow-up measures in a thorough manner," Hwang said. 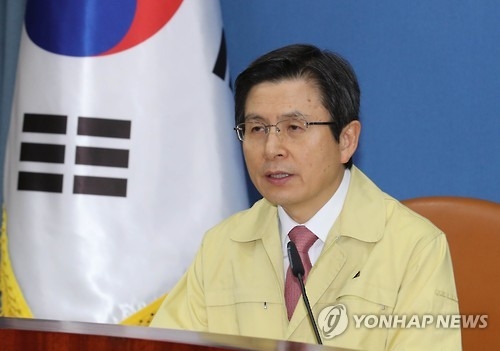 "Before we started making all-out efforts (to contain AI), a daily average of 6.4 suspected cases took place, but over the past seven days, the figure has been reduced to 1.5," he pointed out.

The acting president then called for intensified efforts to monitor the movement of migratory birds, which have been cited as one cause for the fast spread of the virus, and strict adherence to quarantine and sterilization rules.

Hwang, in addition, urged quarantine authorities to promptly tackle any problems that have been found in their responses to bird flu across the nation.

"I instruct you to come up with ways to more fundamentally improve the quarantine system through consultation with experts," he said.

To prevent additional outbreaks, authorities have culled more than 28 million chickens and other poultry since the first case was recorded on Nov. 16.