SEOUL, Jan. 2 (Yonhap) -- Some 50 lawmakers are expected to join the New Conservative Party for Reform, a splinter from the ruling Saenuri Party, when it officially sets sail later this month, its floor leader said Monday.

A group of 30 former Saenuri lawmakers established a separate negotiation body at the National Assembly last week after departing from the ruling party amid the factional feud with loyalists of President Park Geun-hye, who was impeached by the parliament in December for corruption.

"Around Jan. 8, up to 10 additional lawmakers from Saenuri will join the new party," said Rep. Joo Ho-young, the group's whip, during an interview with BBS Radio. He expressed expectations that the final figure will exceed 50.

Saenuri's new interim head earlier threatened a sweeping purge of the president's key allies, calling on them to leave the party by Jan. 6. He said they should take responsibility for causing its crisis by leaving voluntarily.

According to the survey conducted by Yonhap News Agency and KBS, South Korea's top newswire and broadcaster, respectively, last week, Moon Jae-in, former head of the main opposition, remained the front-runner among presidential hopefuls with an approval rating of 21.6 percent, trailed by Ban with 17.2 percent and Seongnam Mayor Lee Jae-myung with 12.4 percent.

The survey conducted on 2,022 adults last week has a margin of error of plus or minus 2.2 percentage points. 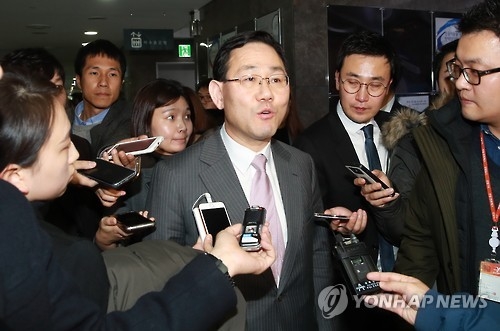