The claim was made in a report, titled the "North Korean Ballistic Missile Program," released in the December edition of the Korea Observer published by the Institute of Korean Studies (IKS).

Theodore A. Postol, an emeritus professor at MIT, and Markus Schiller, an aerospace engineer at Munich-based ST Analytics, said there are many uncertainties in our current knowledge of the KN-11 system, but there is enough known to provide at least a lower bound estimate of its capabilities.

The KN-11 SLBM is capable of carrying a 1.5-ton warhead nearly 450 kilometers or a 1-ton warhead to 600 km or more. It could have a range of 800 km with a 1-ton warhead though more details are necessary to finalize the maximum range of the long-range missile, the IKS report said.

"This means that when the KN-11 is eventually deployed on diesel-electric submarines, it will almost certainly have the payload and range to carry a heavy first-generation nuclear warhead designed for ballistic missile delivery from large areas of ocean," it said.

Missile defenses like the Terminal High Altitude Area Defense (THAAD) that are designed to intercept incoming missiles from a relatively well-defined direction will not be able to readily engage such an "all azimuth" SLBM, the experts said.

North Korea successfully conducted an SLBM test in August, sending the missile some 500 kilometers over the East Sea, the greatest distance the communist nation has achieved since it began SLBM tests last year. Two other tests were conducted in April and July that ended in failure. 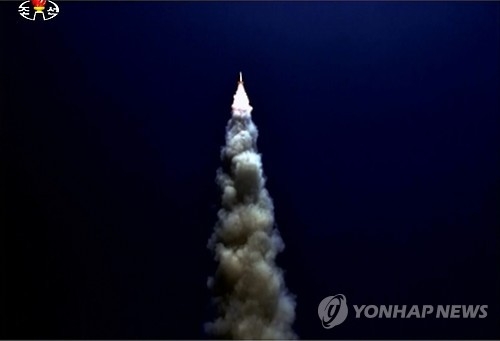 In a separate paper titled "North Korea's Stockpiles of Fissile Material," Siegfried S. Hecker, a senior fellow at the Center of International Security and Cooperation at Stanford University, said the North is rapidly increasing the size and sophistication of its nuclear arsenal after conducting five nuclear tests in the past decade.

Pyongyang currently holds 20-40 kilograms of weapons-grade plutonium, sufficient for the manufacture of four to eight plutonium bombs. It is expected to have an additional 6 kg of plutonium each year, he said.