"To ensure that there would not be any slightest problem in our robust security, we will strengthen our defense capabilities, and strongly respond to North Korea's nuclear threats through close cooperation with the international community," Hwang said during a speech at the government's kick-off ceremony for the new year. 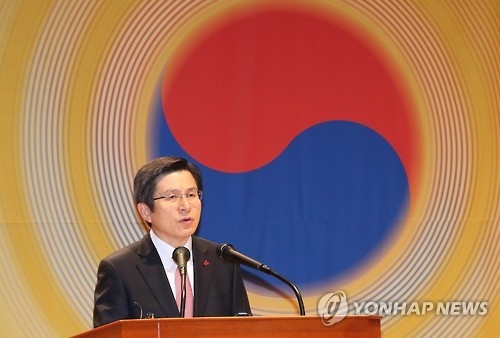 He said that the government will take bold steps to remove unnecessary regulations, and strive harder to restore domestic consumption and bolster exports. He also pledged to enhance support for small and medium-sized firms, startups and new industries.

During a regular high-level meeting on state affairs later in the day, Hwang vowed to offer across-the-board support for South Korean firms seeking to clinch overseas business deals. He stressed the importance of advancing into overseas markets to create new jobs and stimulate the economy.

"This year, the government, in tandem with the civilian sector, will muster up its capabilities and mobilize all possible resources in order to expand overseas infrastructure construction deals for South Korean firms," Hwang said.

He also said that through an advisory panel of government officials and experts, the government will try to systematically support South Korean enterprises.

The acting president, in addition, said that the government will use various existing tools, such as the economic development cooperation fund, designed to support developing countries, to help South Korean firms expand their footholds abroad.