Park, impeached by the parliament in December, on Sunday denied that she had behind-the-scenes ties with her longtime confidante Choi Soon-sil, who is accused of exerting influence on state affairs for personal gains. The remark came as the Constitutional Court is currently reviewing the legitimacy of her impeachment motion.

The president said she was frustrated by what she called "distorted and false" suspicions and "erroneous" media coverage.

"Park's understanding of law even falls behind elementary or middle school students," Rep. Choo Mi-ae of the main opposition Democratic Party said. Choo said it is problematic that Park considers discussing state affairs with the confidante without going through official procedures as lawful.

Rep. Park Jie-won, former interim head of the People's Party, said Park's explanation on her whereabouts during the sinking of the ferry Sewol was mere "sophistry."

On Sunday, Park reiterated that she carried out her official duties on the day of the tragedy. Rumors have persisted that she received plastic surgery or other treatments during the day, with critics claiming her negligence of duties led to the death of around 300 people.

Sohn Hak-kyu, also former leader of the main opposition who stayed clear of politics for some time before returning recently, said Park seems to "still consider the people as fools." 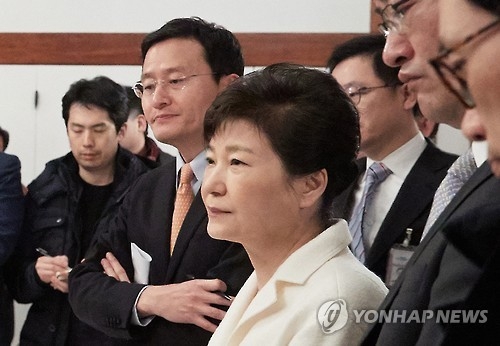