Under the supervision of the Chief of Naval Operations Adm. Um Hyun-seong, some 20 warships and aircraft took part in maneuvers aimed at dealing with provocations by North Korea, the Navy said in a statement.

Adm. Um urged sailors to "stay focused on their duties and stand ready to fight at any time" as North Korea could raise military tension if it miscalculates that South Korea and the U.S. will not be able to respond effectively as they are undergoing political changes.

In 2010, the North shelled Yeonpyeong Island in the Yellow Sea, killing two Marines and two civilians. The rogue state also attacked the Cheonan corvette that killed 46 sailors in the same year. 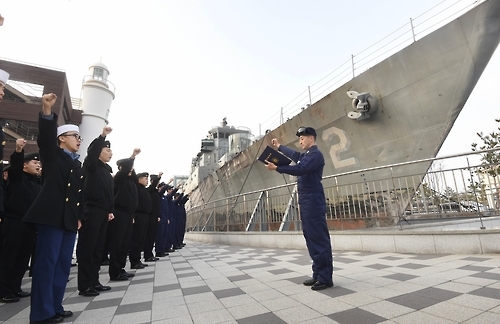 The drills under way are focused on striking enemy submarines and warships in the East and Yellow Sea, while along the country's southern coast, the exercise focused on protecting nuclear facilities and following and seizing ships suspected of carrying weapons of mass destruction (WMD), it said.

Meanwhile, the Army said in a statement that it has conducted a live-fire drill involving the K-9 self-propelled howitzers engaged in mock counter-battery exercises using artillery hunting radars.