"The change of the Korea Exchange's (KRX) structure is the future of the capital market that (we) can never give up," Yim Jong-yong, chairman of the Financial Services Commission, said in a ceremony to mark the start of this year's equity trading at the Seoul bourse.

The government will make every effort so that a related bill can pass the National Assembly.

It proposed legislation transforming the bourse operator into a holding company. It calls for the headquarters of the envisioned holding firm to be located in the southern port city of Busan and it to be listed on the stock market.

But lawmakers failed to approve the bill in the previous parliament, split over the location and how to use profits from the listing.

Both the authorities and the KRX have emphasized that the shift in the governance structure of the Seoul bourse is necessary to raise its global competitiveness. 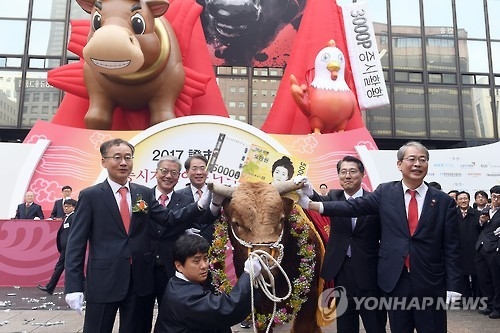 He cited increased external uncertainties, including the pace of the U.S. interest rate hikes, the policy direction of the incoming U.S. administration, the post-Brexit situation, China's economic conditions and European nations' political issues.

He also pointed out that the recovery of domestic spending is being delayed, while households and corporations are coming under growing burden from interest rate hikes.

The government will respond "boldly and swiftly" to any indication of a bond market crisis by creating market stabilization funds if necessary, Yim said.

"As to securities firms and other financial investment circles, the authorities will conduct a stress test under more conservative assumptions against every possible risk factors and take pre-emptive measures to enhance soundness," he said.

Zhin Woong-seob, governor of the Financial Supervisory Service, also stressed that the role of the stock exchange, a key infrastructure of the equity market, is more important than ever.

"Our economy stands at a crucial juncture, as it should secure new growth momentum at a time when the growth potential is gradually weakening," he said during the event.

He called for the KRX and investment firms to be active in making inroads into overseas markets.

"It's needed to seek a co-prosperity strategy from the mid- to long-term prospective by forming various global networks," he said.

South Korea can create new business opportunities in emerging countries, while offering substantial help in the capital market, he added.