SEOUL, Jan. 2 (Yonhap) -- South Korea's two opposition parties are competing to win over voters in the traditional liberal bastions in the nation's southwest ahead of the presidential election likely to be held earlier than scheduled.

Leading officials of the main opposition Democratic Party and the splinter People's Party visited the southwestern city of Gwangju to hold events to greet the new year and meet local residents.

The two parties have been struggling to expand their presence in the South and North Jeolla provinces, which are traditionally supportive of liberal and progressive parties.

According to a survey conducted last week by Yonhap News Agency and KBS, South Korea's top newswire and broadcaster, respectively, the Democratic Party was the most favored party in the regions with a 46.5 percent approval rating, trailed by the second-largest opposition People's Party with 22.7 percent.

The figures are far above the nationwide approval scores of 36.3 percent and 9.7 percent for the Democratic Party and the People's Party, respectively.

During his visit to Gwangju on Sunday, Moon Jae-in, former head of the main opposition and current presidential poll leader, warned the People's Party against allying with a splinter group of the ruling Saenuri Party.

A group of 30 former Saenuri lawmakers, who distanced themselves from corruption-ridden President Park Geun-hye, has defected from Saenuri to establish a new conservative party in late January. They are believed to have voted to impeach Park on Dec. 9.

Moon said if the People's Party joins hands with the Saenuri dissenters, it would be "betraying the desire of the Jeolla people."

Moon said the main opposition wishes to cooperate with the People's Party to create a new liberal administration.

Officials from the People's Party, who visited the region Monday, said it has no plan to cooperate with Moon, claiming he is only using the region for his political interests.

"We do not plan to cooperate with politicians who sought factional supremacy and used the people of Jeolla with political motivations," said Rep. Kim Dong-cheol, the interim leader of the People's Party.

Rep. Joo Seung-yong, the party's floor leader, also said Moon is responsible for the split of the opposition bloc.

"In the next presidential election, the People's Party will win by encompassing all powers except for loyalists to Park and Moon," Joo said. 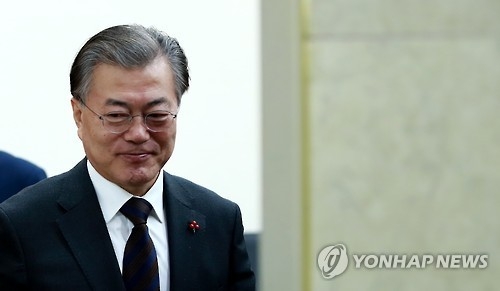