The idol group's agency Starship Entertainment unveiled a clip featuring short highlights of all the tracks off the album via its official YouTube channel Starship TV.

The lead song "I Wish," produced by prominent producers including Glorious Faces, Seo Ji-eum and Yang Gang, is about a shy girl who just took her first step in a new relationship.

The five-track album "From WJSN" will be released on Tuesday on the stroke of midnight. 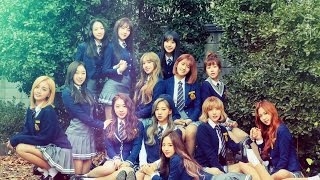