Rep. Joo Ho-young of the New Conservative Party for Reform, which will be launched in late January, raised questions about Moon's qualifications to contest for the presidency, citing his controversial remark in Gwangju, a traditional liberal bastion.

"It is very regrettable that the very man who has to spearhead efforts for national unity and the resolution of regional conflict has made such a remark," Joo said during an in-house conference on the platform and policies for the new party created by defectors from the ruling Saenuri Party.

Moon, a former head of the Democratic Party, said on Sunday it would be "betraying the desire of the Jeolla people" if the minor opposition People's Party joined forces with the new conservative party.

The two liberal opposition parties have been competing for clout in their traditional support base of the South and North Jeolla provinces.

"Bringing the people together and reducing conflict is the biggest virtue of the country's top leader," Joo added.

Joo added Moon, chief of staff to former late President Roh Moo-hyun, had sparked conflict by dividing people into supporters and opponents of Roh. Moon gained popularity after Roh's death in 2009 as he was considered to have inherited the former liberal leader's legacy. 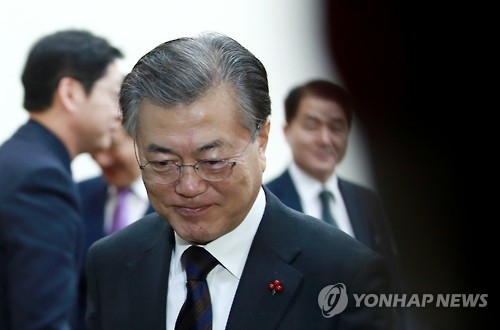