"Hwarang," which airs Mondays and Tuesdays on KBS 2TV, scored 292.4 points on the Content Power Index (CPI), becoming No. 1 among TV programs during the week of Dec. 19-25. 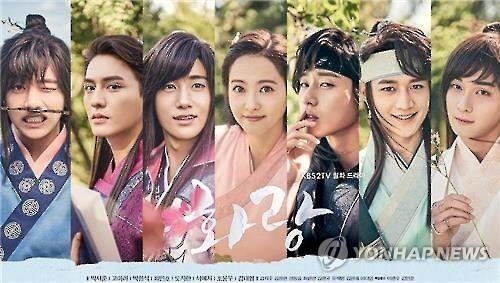 The period show, which began airing on Dec. 19, is about an elite group of young and handsome men and their tales of passion, love and friendship in the turmoil of the Silla Kingdom (57 B.C. - A.D. 935).

The drama is based on the actual Hwarang youth organization that existed and its young men who roamed the land to train themselves in the arts, culture and self-defense.

The show stars up-and-coming stars and idol singers, including Choi Min-ho of boy band SHINee and Kim Tae-hyung, or V, of the K-pop group Bangtan Boys.

tvN's "Guardian: The Lonely and Great God," slipped a notch to second place, with 282.9 points. SBS' "Legend of the Blue Sea" and "Dr. Romantic" ranked third and fourth, respectively.