SEOUL, Jan. 3 (Yonhap) -- Seongnam Mayor Lee Jae-myung, one of the leading presidential hopefuls for the opposition bloc, said Tuesday that South Korea should pay less of the defense-cost sharing with the United States, clashing with calls by President-elect Donald Trump's plan to get Washington's allies to contribute more.

"South Korea's defense-sharing cost should be on par with that of Japan," Lee said during an interview with CBS Radio.

Seoul and Washington have been sharing the cost of U.S. troops stationed in South Korea under the special Measures Agreement.

According to the survey conducted last week by Yonhap News Agency and KBS, South Korea's top newswire and broadcaster, respectively, Lee had an approval rating of 12.4 percent, placing him third after Moon Jae-in, a leading member of the main opposition Democratic Party, and former U.N. Secretary-General Ban Ki-moon. 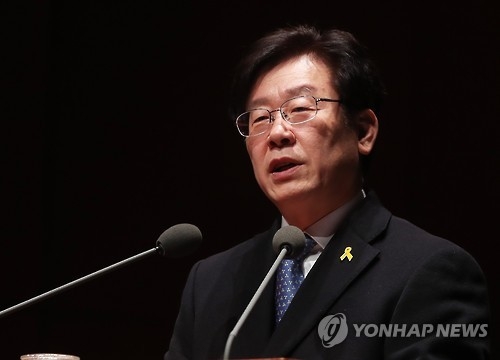