South Korea's outbound shipments to China reached a 14-month high of US$12 billion in December, according to the Ministry of Trade, Industry and Energy data. China accounts for one fourth of overall South Korean exports.

The December tally comes after posting an on-year decline for the 16th consecutive month in October, the longest decline streak, according to the data.

Experts say South Korea's exports to China are now on a recovery track as the Chinese economy is picking up momentum after the manufacturing sector continued to accelerate.

Moon says Beijing's pro-growth policies and measures to cut imported materials contributed to more South Korean companies moving their overseas factories out of China to third countries such as Vietnam. 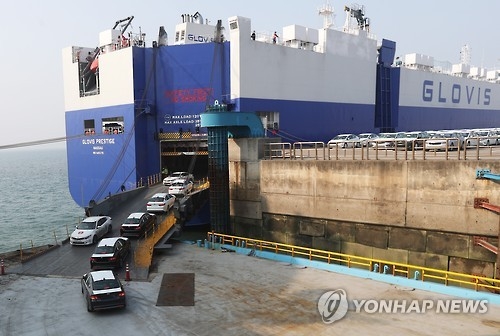 By products, outbound shipments of wireless devices, including mobile phones, to China jumped 36.5 percent on-year between Dec. 1 and Dec. 20.

However, there are still persistent concerns, with experts saying that a possible trade friction between the United States and China could deal a blow to South Korea's exports amid U.S. President-elect Donald Trump's looming protectionist policies.

Trump has said that he would impose a 45-percent tariff on Chinese products, instruct his treasury secretary to label China as a currency manipulator and order the U.S. Trade Representative to bring trade cases against China.

Also, there are concerns that China may retaliate against the decision to deploy an advanced anti-missile defense system on South Korean soil.

Recently, China announced that it will exclude vehicles with South Korean batteries from receiving subsidies.

"A total of 4,287 products will receive tax benefits starting next year thanks to the South Korea-China FTA," said Choi Yong-min of KITA.