SEOUL, Jan. 3 (Yonhap) -- The new interim head of the ruling Saenuri Party continued to upbraid party members loyal to President Park Geun-hye, a move expected to spark another round of factional feuding after an exodus of lawmakers last month.

In Myung-jin, head of the emergency leadership panel, earlier threatened a sweeping purge of key Park loyalists, calling on them to leave the party and take responsibility for the political scandal which led to the president's impeachment in December.

In response to In's demands, former Saenuri head Rep. Lee Jung-hyun announced on Monday he will leave the party, but the push has run into opposition from many within the conservative party.

"Suh shouldn't be so rude and show respect," In said, claiming he is only asking for those responsible to make the right decision by themselves.

"Park lost her post. I am wondering what her followers are doing. If it was me, I would resign from the parliament and become a farmer," In said. "Asking them to leave the party while maintaining their status as a lawmaker is not a lot to ask."

As Suh stands as a key figure among the loyalists, political pundits said the remark indicates In's intent to seek an all-out battle.

Saenuri faces its biggest crisis as Park was impeached by parliament on Dec. 9 over suspicions of corruption and influence peddling. A group of 29 lawmakers bolted from the party last month, forcing Saenuri to cede its position of largest player in parliament to the main opposition Democratic Party.

Concerning the lawmakers who left Saenuri to form a separate negotiation body, In said they are still not free from being responsible for Park's wrongdoings.

"They cannot represent the true conservative spirit, even though I know many figures there personally," In said.

The interim head added that former U.N. Secretary-General Ban Ki-moon, who is cited as a potential candidate, would have to meet the ethical standard of the party, even if he wishes to join Saenuri.

"We all know that no one can become president without our support," In said.

In, on the other hand, welcomed Lee's resignation, adding his decision sets a great example as a former leader. 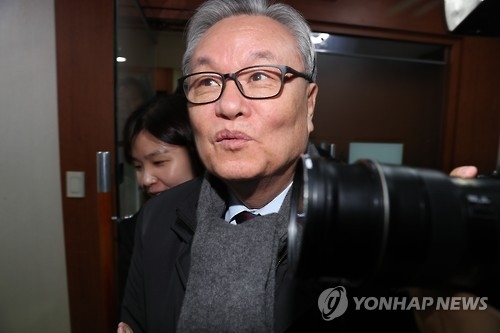