During the first Cabinet meeting in the new year, Hwang also renewed his pledge to preemptively respond to internal and external economic risks, and mobilize all available resources to reinvigorate the sluggish economy.

"What is more important than anything else is maintaining a robust security posture to ensure that security would not waver under any circumstance," Hwang said. 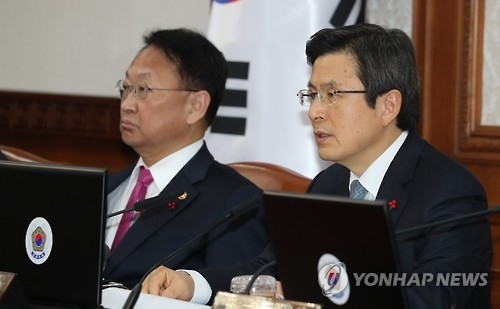 "I call on the ministries of defense and foreign affairs to strengthen our diplomatic and defense capabilities based on Korea-U.S. combined defense capabilities, and enhance the efficacy of international cooperation in coping with North Korea's nuclear threats," he added.

His remarks followed North Korean leader Kim Jong-un's New Year speech in which he said Pyongyang is in the "closing phase" of preparations to test-fire an intercontinental ballistic missile, indicating the unruly regime is ready for another major provocation.

On the economic front, Hwang called on the ministries of finance and trade to strive harder to boost exports and domestic consumption, as well as expanding support for small and medium-sized firms and young entrepreneurs seeking to start new businesses.

Hwang, in addition, stressed the need to make constant efforts to foster new industries and future growth engines to ensure that the country can lead the global competition in the so-called fourth industrial revolution -- the fast-paced transformation marked by the convergence of cutting-edge technologies such as big data and artificial intelligence.

"Related ministries should push to innovate our industrial ecological system through support for research and development, and bold regulatory and institutional reforms," he said.

Hwang also pledged to boost policy efforts to enhance the livelihoods of the socially vulnerable such as low-income families, and strengthen public safety measures to better protect citizens from natural disasters, crimes and accidents.

Later in the day, Hwang made an onsite trip to the Seoul Digital Industrial Complex in western Seoul in an effort to highlight the government's resolve to boost sagging exports and revitalize the economy.

"The government will muster up its capabilities to make another economic leap by revitalizing exports," Hwang said.

"Each time our economy was hit by difficulties such as an oil shock and the foreign exchange crisis, exports played a role as a locomotive for the country's economic recovery," he added.

The complex is home to 9,815 companies, most of which specialize in information and communication technologies, and electric and electronic goods. More than 152,900 employees work for these companies.