SEOUL, Jan. 3 (Yonhap) -- The first book printed in hangeul after the Korean alphabet was invented by King Sejong in the early Joseon Dynasty (1392-1910) has been designated as a national treasure, the Cultural Heritage Administration said Tuesday.

The book, titled "Worincheongangjigok" or "Songs of the Moon Shining on a Thousand Rivers," has became National Treasure No. 320 and is a compilation of hymns written by the king in 1449 extolling the good deeds and greatness of Buddha. Originally comprised of three series, only one remains as of today.

In the mid-15th century, it had been enshrined and sealed inside a Buddha statue in Silsang Temple in Buan, some 280 kilometers south of Seoul, in North Jeolla Province. It remained sealed until a monk from a nearby temple accidentally found it in 1914. The book was bought by Mirae N, a textbook publishing company, which in 2013 donated it to the Academy of Korean Studies.

Additionally, six cultural assets, including the Seals of State, have also been designated national treasures, the administration said. 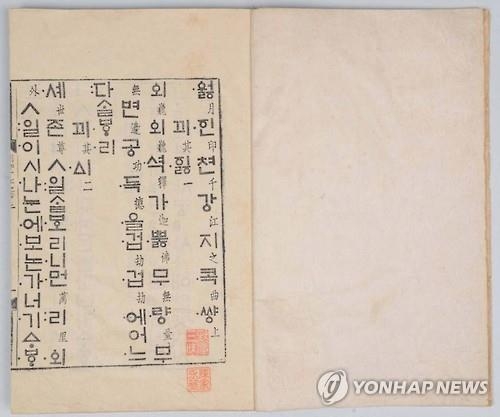