This year, however, Ban, long bandied about as a powerful presidential contender, has yet to make a call to the impeached president, reinforcing the speculation that he is distancing himself from the unpopular leader mired in a highly charged corruption scandal.

Ban completed his second five-year term as the U.N. chief at the end of last year. After his departure, he reportedly made calls to Lee Hee-ho and Kwon Yang-sook, the wives of late former Presidents Kim Dae-jung and Roh Moo-hyun, respectively, to offer his New Year's greetings.

"As far as I know, President Park has not yet had any telephone conversation with former U.N. chief Ban in the new year," a presidential official told Yonhap News Agency over the phone, declining to be named.

On Jan. 1, last year, Ban had telephone talks with Park during which he praised the landmark deal between Seoul and Tokyo to settle the issue of Japan's wartime sexual enslavement of Korean woman, which has long been a thorn in the bilateral relationship.

During the phone conversation in 2014, Ban voiced his hopes for substantive progress in Park's much-trumpeted diplomatic initiatives to promote peace and cooperation in Northeast Asia, and build trust with an increasingly provocative North Korea.

In his New Year's talks with the president in 2015, Ban wished that South Korea would further prosper and develop under Park's leadership.

Political observers said that Ban might think that his contact with Park, reeling from a slew of corruption allegations, would only have a negative impact on his possible campaign for an presidential election expected to come earlier than expected.

Late last month, Ban said he was "ready to give his all" if it would help advance his home country in the strongest indication that he would run for the presidential office Cheong Wa Dae. Ban is expected to return to Seoul in the middle of this month.

Before the scandal involving the president and her friend was brought to the fore in late October, Ban, who was then seen as a contender from the ruling bloc, had maintained a lead over Moon and other potential opposition candidates.

Most observers now dismiss the possibility of Ban running for president on the ticket of the ruling Saenuri Party that has lost public trust in the wake of the scandal. 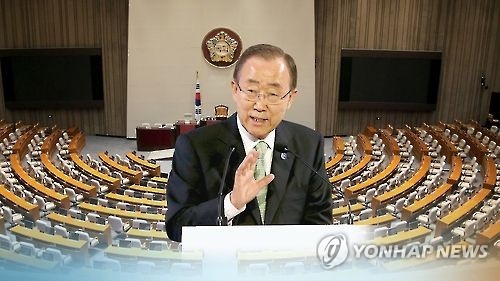 Former U.N. chief Ban seen as distancing himself from Park

Former U.N. chief Ban seen as distancing himself from Park