Several hours beforehand, FNC Entertainment had uploaded a single called "Bing Bing," which was likely to make the final cut of the album, on social media, offering a sneak peek of the album.

Its music video features AOA members as sexy illusionists performing each member's own magic tricks, reminiscent of the hit film "Now You See Me."

As the lead rapper, Jimin's signature intro verses, similar to those in "Like a Cat," open the video, another member Seol-hyun proceeds to jump into an aqua tank filled with water, resembling the legendary underwater escape acts of renowned Hungarian-American stunt performer Harry Houdini.

Subsequently, other members' magic shows follow, including card tricks and knife throwing, with roses, replacing daggers, being thrown towards but slightly missing a person bound on a rotating wheel.

Meanwhile, FNC Entertainment asked for fans' die-hard support for AOA's very first studio effort, as it's a demonstration of the members' musical prowess, which has been on the up and up since its debut in 2012. 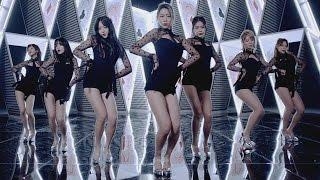