The chambers, located in Seongju, 296 kilometers southeast of Seoul, hold jars containing the placentas and umbilical cords of King Sejong's (1397-1450) 18 sons and one grandson.

The county eventually aims to register the royal site on the World Heritage List by 2020, Kim Hang-gon, the head of the Seongju County office, said.

To that end, the country has held academic seminars and published books and materials on the chambers, he said, adding that another seminar is scheduled for September.

The placenta storage culture of Korea involves the washing of the placenta of a newborn prince in a river and then enshrining it in a jar within a small tomb-like chamber. 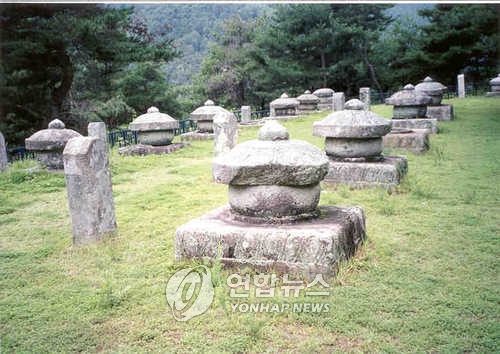 Taebong Peak in Seongju, where the chambers were built, was believed to be the ideal site for the relics during the Joseon Dynasty (1392-1910) as the mountain range around it has many rivers and streams.

"We've held a ritual for the enshrinement of the royal placentas every year, and made it a world-renowned life culture festival," Kim said.

The country is proceeding with the procedures to register the chamber as a World Heritage site via the Cultural Heritage Administration, he added.
(END)